I hopped in the vehicle and headed out to some uncrowded locations late this morning for some walking and some shooting. I had my whole bag with me but only used the EF 24-70mm f/4L IS USM lens.

I started at Cohoes Falls but with overcast skies, the images are nothing exciting. I then headed up to Vischer Ferry Nature Preserve, stopping at the Crescent power station looking over at the end of Flight Lock Road in Waterford. Here is one of the images.

Once at Vischer Ferry, I walked around the trails a bit. Here are two reflection scenics HDR processed in both color and black and white. 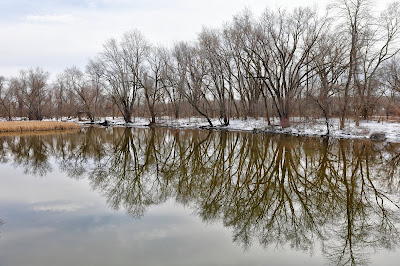 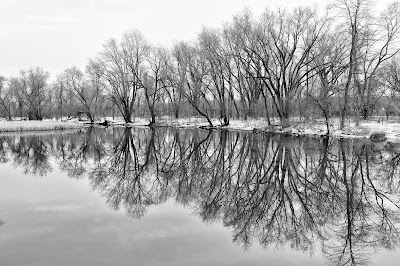 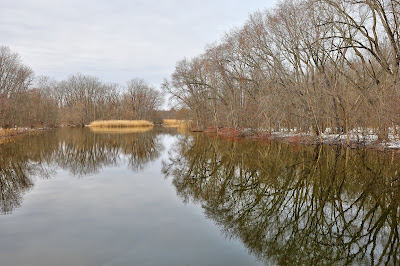 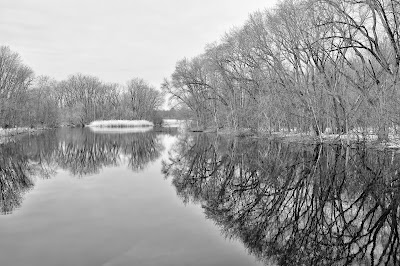 The 24-70mm lens has a closeup setting that lets you focus closer at 70mm and get to a magnification of .7X. The image stabilization in this lens also is Canon's hybrid design which supposedly helps hand held closeup shooting. This Tree Lungwort is a handheld single file at f/11, 1/125th second and ISO 400. 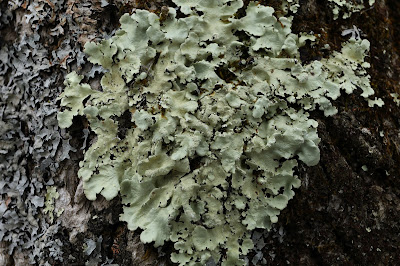 Posted by David Truland at 1:55 PM No comments:

Having decided not to keep the EF 16-35mm f/4L IS USM lens, I sent it back to Lens Rentals a few days early. This morning I traveled to the Schoharie Crossing State Historic Site, a new location for me. Although I had a trail map on my phone, I didn't see an easy way to connect with any trails from the only parking lot I could find.

My main purpose was to check out the Schoharie Aqueduct which carried the old Erie Canal across the Schoharie Creek. While the creek is normally quite tame, in times of flood, like Hurricane Irene, or prolonged rain with summer storms, it becomes many times its normal size.

Here are some shots I could get from the East side of the creek where the visitor center and parking lot are located. I had both the 24-70mm and 70-200mm lenses, each attached to an EOS RP body.

Posted by David Truland at 3:43 PM No comments:

I Don't Think I'll Keep It

While my plan was to purchase the rented EF 16-35mm f/4L IS USM lens at the end of the rental period, my current thinking is that I will pass. The lens is great but there are a few points against purchasing this copy at this point.

First, the lens is larger and heavier than either my EF 17-40mm f/4L lens or my EF 24-70mm f/4L IS lens. Second, this is the first rental for this particular copy and the purchase price is only $21 less than the new retail cost of $999 which would include a warranty from Canon.

Third, the lens has some circular flare with the sun in the frame which I've seen on online review testing and which I ran into this morning. Here is some rainbow flare at 16mm and f/8, which is typical, apparently. 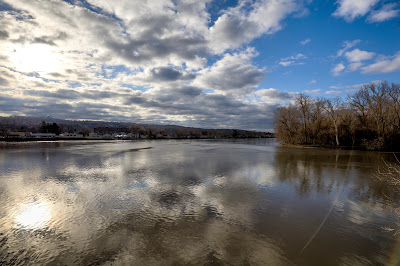 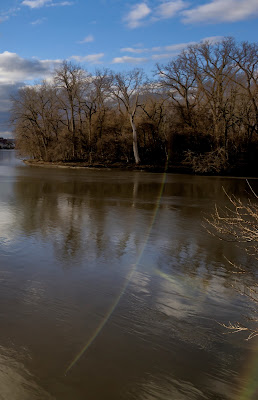 In any case, I have until Friday to evaluate whether this lens is worth the extra money over the 17-40mm lens I already own. Here are some other shots from this morning's walk.

Posted by David Truland at 10:49 AM No comments:

As I did when I rented the EF 24-70mm f/4L IS USM lens, I stopped at Oakwood Cemetery after picking up the EF 16-35mm f/4L IS USM lens from FedEx. I'm hoping this lens will take the place of my 17-40mm lens which I'm currently trying to sell.This lens has better image quality and image stabilization although it costs almost twice as much. My plan is to use it in place of the 24-70mm lens in the two camera setup with the 70-200mm lens. If I'm only going to use one camera it will probably have the 24-70mm lens attached.I've started a gallery dedicated to Oakwood Cemetery at https://trulandphotography.com/oakwood. The gallery contains more photos from today. I hope to be revisiting the cemetery more frequently in the future.The first two shots show the extremes of the focal length range.

Posted by David Truland at 6:50 AM No comments:

A sunny, if not overly warm, afternoon was a good opportunity to take a nice 3.7 mile walk around Vischer Ferry Nature and Historic Preserve this afternoon. All these shots are with the EOS RP and EF 24-70mm f/4L IS USM lens. 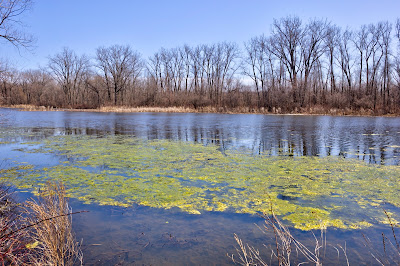 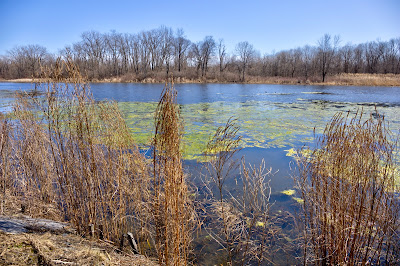 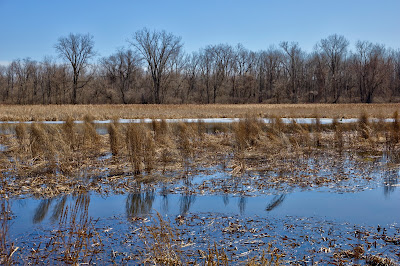 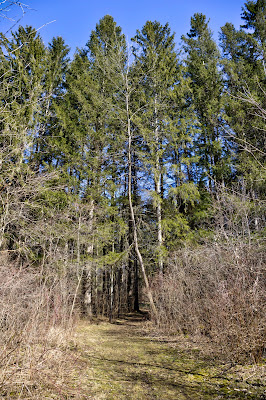 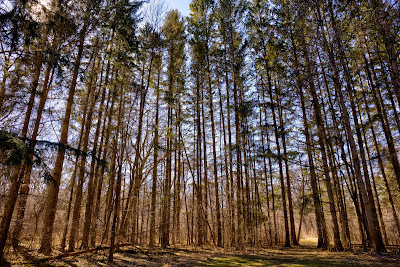 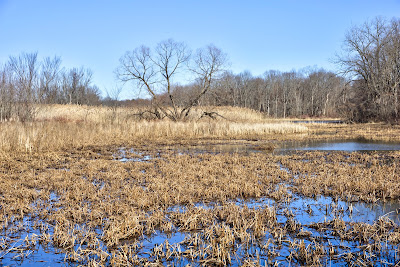 Posted by David Truland at 4:48 PM No comments:

I'm really happy with the way my trade in transaction with Unique Photo worked out. I had been trying to sell my 7D Mark II and four lenses on craigslist with no serious interest. Like everything else, craigslist is not what it used to be.

My total asking prices added up to $2,000, of which I could probably expect around $1,500 with no idea of the time frame. My inquiry of Unique Photo resulted in an estimate of up to $1,300 in store credit. This would be enough to get what I wanted so I shipped the gear down to them on Wednesday.

The gear arrived on Thursday, they checked it out and ended up giving me $1,330 which was the exact price for an EOS RP, control ring adapter, grip and an extra LP-E17 battery. No sales tax, no shipping. They shipped the order out the same day and I received it today, one day later.

Here is how my ThinkTank Photo Airport Commuter backpack looks packed up with my current every day equipment. 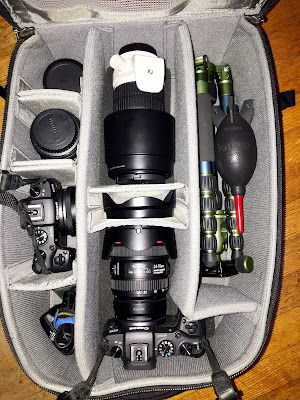 I have OP/TECH pro loop connectors on both camera bodies which I can use with their shoulder straps or their dual harness system.

UPDATE 3/7/2020: Here are the first shots with the new RP body at one of my usual new gear testing locations, Cohoes Falls. These are five file HDR composites with no deghosting added to blur the water a bit. 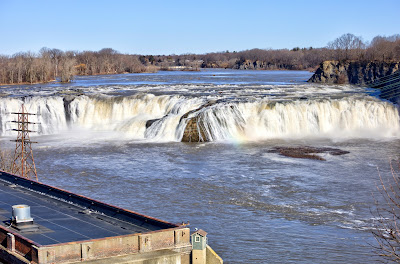 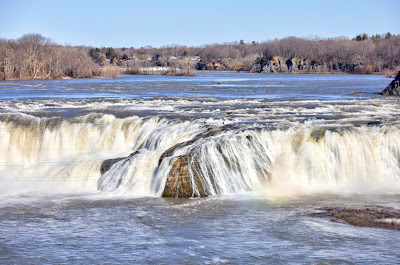 UPDATE: As of the end of March, I have moved down to a ThinkTank Photo Airport Essentials backpack which is about a half inch narrower from side to side, almost two inches shallower and a bit shorter when standing up. I like the arrangement better and it's noticeably smaller and easier to handle. The only gear change is the tripod is no longer in the bag and the filters are no longer in an exterior pocket. I even have room for another RF prime lens (50mm) when Canon gets around to releasing it. 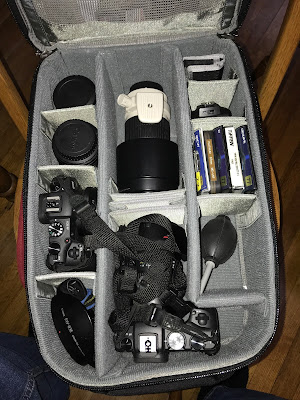 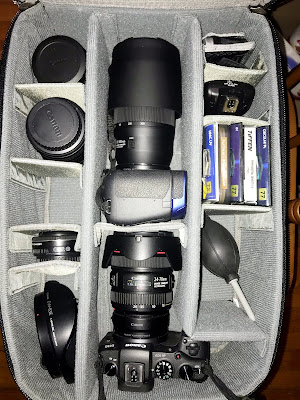 Posted by David Truland at 3:23 PM No comments:

While today was not nearly as warm as yesterday, which hit a high of 63 degrees, it was sunny. It was also very windy with gusts of 40 to 45 miles per hour. Waterford Harbor had white caps and it wasn't easy to hold the camera steady for five hand held bracketed shots.

I carried what is temporarily my only camera body, the EOS RP, with the EF-24-70mm f/4L IS USM lens on the three mile walk over to, and around, Waterford and back. Here are some results. 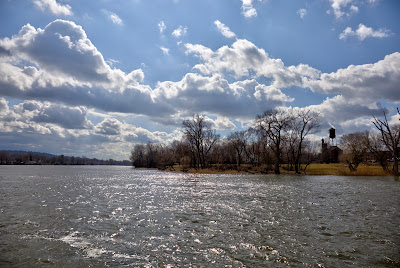 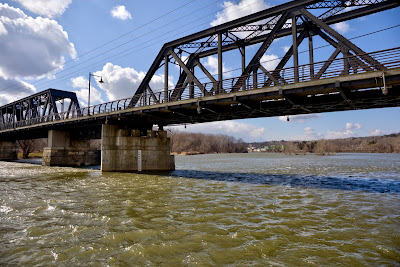 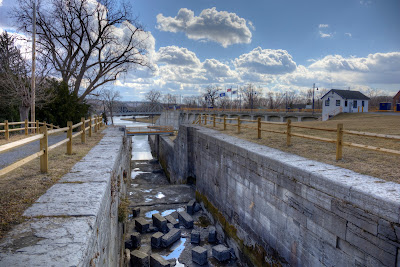 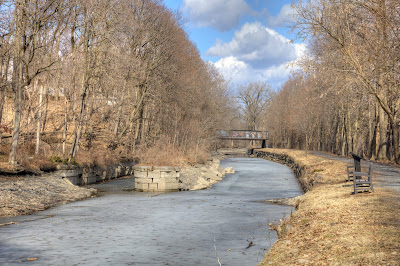 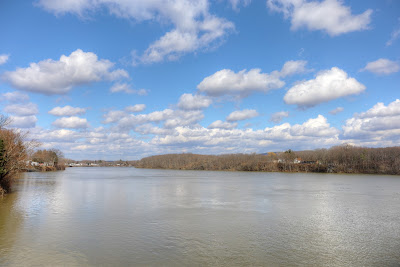 Posted by David Truland at 3:00 PM No comments:

I had a two mile hike around Vischer Ferry Nature Preserve today with the EOS RP and EF 24-70mm f/4L lens. The temperature was around 60 degrees with partly cloudy skies and a calm breeze. Within a few hours there was total cloud cover and the wind was picking up.

I know I've been waffling about my gear lately. I am now back to my original plan to sell my 7D Mark II and EF-S lenses and pick up a second EOS RP. This plan is now pretty set as I am shipping all the gear off to Unique Photo in New Jersey in exchange for store credit sufficient to get the RP, adapter, grip and extra battery. An extended trip to Michigan in April, with a stop at Niagara Falls, is one of the motivations to have things all set sooner rather than later.

So, I will be out of the sports and wildlife business as long as I am working with two RP bodies. Which is fine. I'm looking to concentrate on more creative aspects of photography and the kit I'm putting together should be fine for that kind of work.

Here are some shots from today. 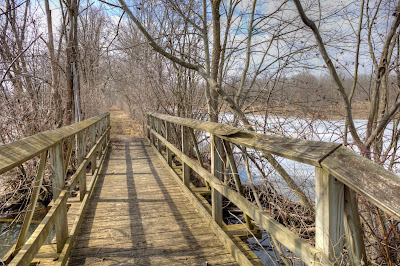 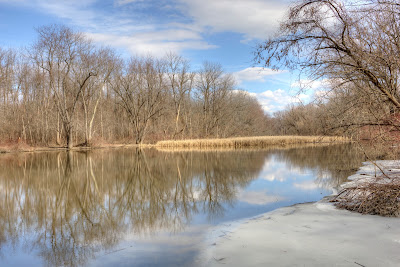 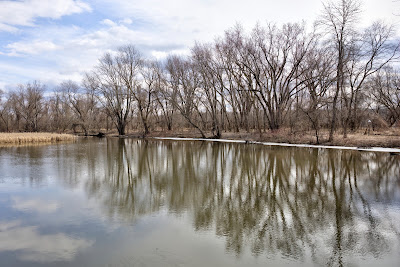 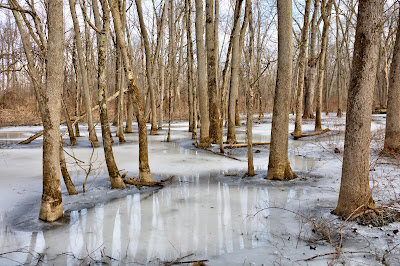 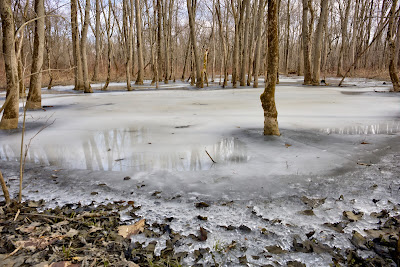 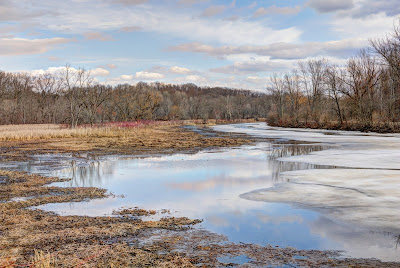 Posted by David Truland at 3:57 PM No comments:

Email ThisBlogThis!Share to TwitterShare to FacebookShare to Pinterest
Labels: Gear, HDR, Scenic
Newer Posts Older Posts Home
Subscribe to: Posts (Atom)
To view larger images simply click on the image then click on it again. You can then simply use the back button or swipe to go back to the blog.