The Past Couple of Days

Not that I'm back from graduation trips, I've been out walking again in the mornings. Saturday I went on to Peebles Island with my 5D mark III and 100mm macro lens and Sunday over to Waterford and up the canal path with my 50mm lens.

Here are two shots from each morning. 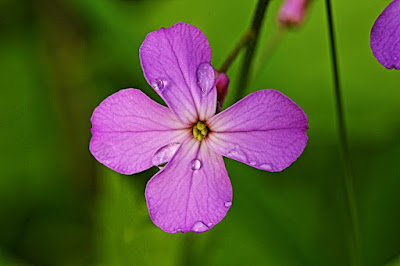 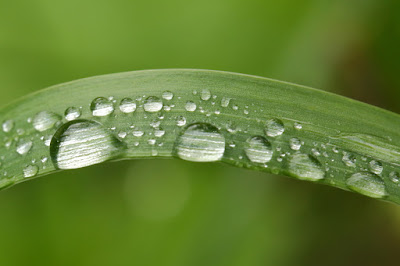 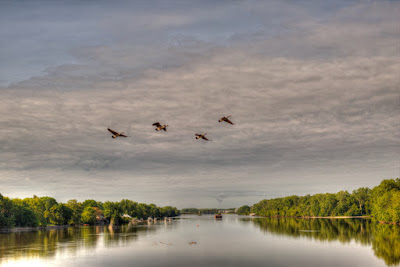 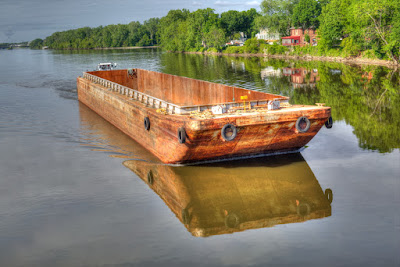 Posted by David Truland at 7:57 AM No comments:

In contrast to yesterday's sunny skies, today was cloudy with sporadic rain. It was nice enough, though, for a tour of the University of Chicago campus in Hyde Park with an emphasis on the Rockefeller Memorial Chapel.

The title "chapel" seems a bit odd in this case given the size, although, to my knowledge, the building does not serve as an active church so the title is probably accurate.

Here is an exterior shot of the building. 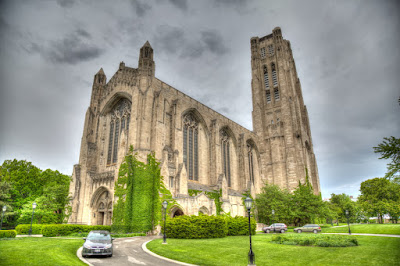 Here is a shot of the front of the sanctuary. 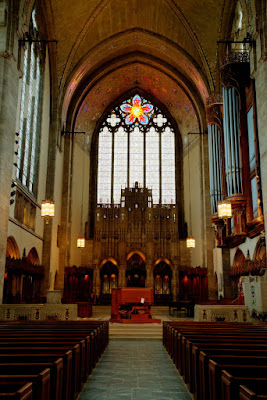 The highlight of the RMC is its carillon and the tower within which it is contained. The RMC carillon and it's sister carillon at Riverside Church in New York City are the largest carillons by weight in the world.

The carillon is played from a room 240 steps up tight spiral staircases, near the top of the tower. Here is a shot of University Carillonneur Joey Brink at the console prior to his half hour recital this afternoon. 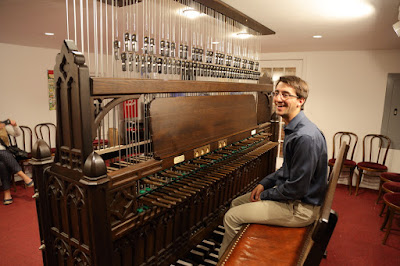 Another 31 steps up the spiral staircase and you're atop the tower with really nice views of the Chicago region. Here are some shots from the top of the tower. 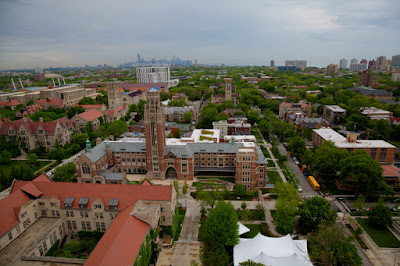 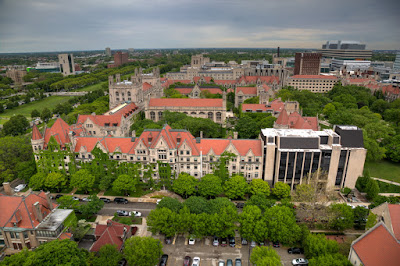 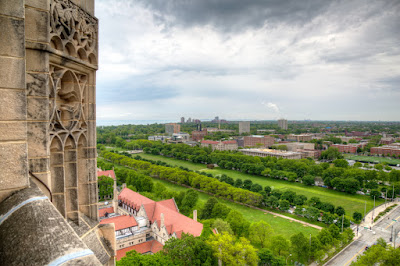 To learn more about the chapel and the carillon and to hear some audio clips visit http://rockefeller.uchicago.edu/the-carillon.
Posted by David Truland at 9:42 PM No comments:

After a weekend of a graduation in New York on Saturday and a graduation in Chicago on Sunday, today was spent sight seeing in Chicago. The weekend was complicated by the magsafe adapter for my ancient MacBook Pro dying on me before I had processed all of the images from Saturday's graduation, much less Sunday's.

By nursing the battery I was able to do some processing and uploading yesterday but was only able to finish up this evening after visiting the Apple store on Michigan Avenue in Chicago. Here are some shots from today.

Posted by David Truland at 8:51 PM No comments:

I'm gearing up for graduations this weekend in Oneonta and Chicago, with the necessary travel. I was at the Schenectady Amtrak station this afternoon and the delayed arrival from Chicago left me with about a half hour on the platform with just me and my camera.

I've decided to stick with my EOS 5D Mark III and EF 24-105mm f/4L IS USM lens for the duration of the graduation season, so this is what I had with me today. These are all 5 file HDR composites, except for the locomotive closeup which is a single file HDR (it was moving). 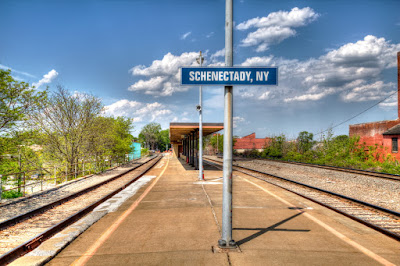 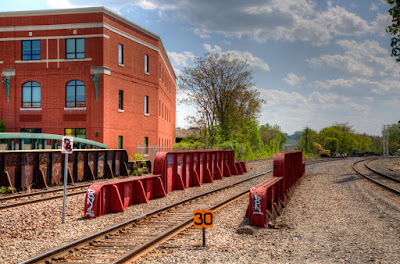 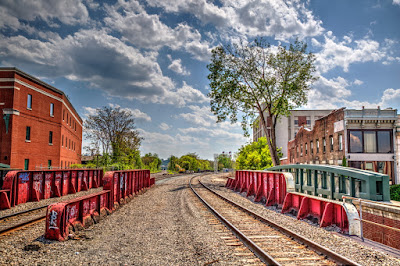 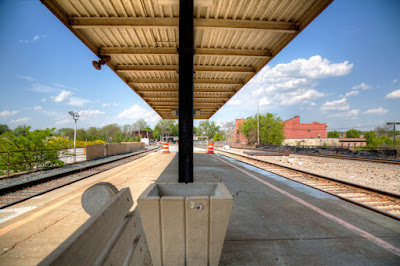 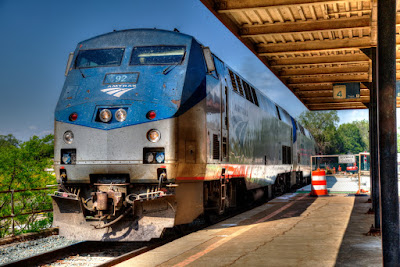 Posted by David Truland at 7:21 PM No comments:

I've done a lot of posts over the years about various ways of making lenses focus closer. Extension tubes, reverse adapters, closeup "filters", extenders (teleconverters), etc. You can clock on the Closeup/Still Life label to see those posts.

Now that I've ruled out selling my 5D Mark III, I'm almost certainly going to sell my 100mm macro lens. In addition, when traveling, other methods to get close up take up far less space in bags. My upcoming trip to Chicago motivated my current examination as the macro lens will not be making the trip.

The two good lenses I will be bringing are my 24-105mm f/4L IS USM and 200mm F/2.8L II USM lenses. The closeup method I was testing was Canon's 500D closeup lens that attaches to the filter threads on the front of the lens.

As a rule, closeup filters have greater effect the longer the lens, as extension tubes have greater effect the shorter the lens. As is shown, there's not a lot of difference by adding the 500D to the 24-105mm lens. This lens has decent closeup focusing built in. The 200mm lens, by contrast, does not have great closeup focusing built in and adding the 500D makes a big difference. Of course, without image stabilization, any serious closeup work with the latter combination would require a tripod.

Posted by David Truland at 7:28 PM No comments:

Yesterday, post sunrise, was an overcast day as the storm that's now bringing rain and wind to the Maine coast made its way closer. Sometimes HDR processing can bring out the colors that are there but that a single image doesn't show. That was certainly the case with the following shots of Portland Head Lighthouse and boats in Perkins Cove.

The bracketing for these images was the usual -2, -1, 0, +1 and +2 EV. Exposure information is for the normally exposed file. 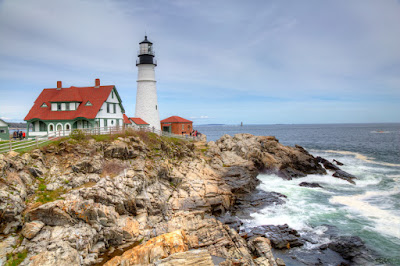 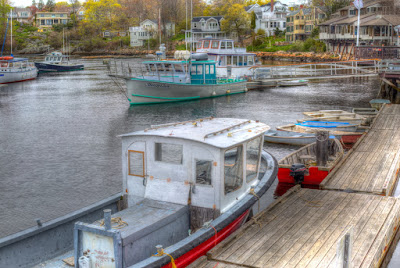 This last photo is a single file processed in HDR software Photomatix Pro and cropped for better composition. 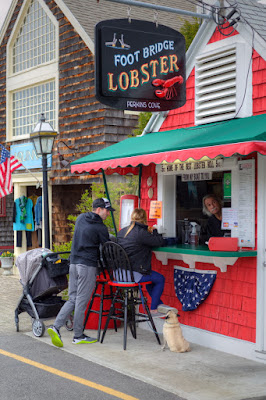 Posted by David Truland at 7:36 AM No comments:

I sold my big Sigma lens yesterday while in Maine for the weekend. The chap I sold it to will be using it with a 5D mark III so it will be at its best.

After using my 7D and SL1 bodies over the past week, especially yesterday at the ocean, I'm not sure I can actually part with my 5D Mark III. Perhaps selling the 100mm macro lens and my SL1 package will be enough, along with the Sigma.

Posted by David Truland at 7:44 AM No comments:

Now that I've decided to sell my 5D Mark III, I wanted to try the big Sigma zoom with a crop sensor camera again. I did two things to try and improve the image quality. I shot at f/11, even though that is in diffraction territory, and I shot mostly at 400mm, where the lens is supposed to be sharper. ISO 1600 gave me fast enough shutter speeds in the early morning full sun.

I spent about an hour at the nest viewing site. I saw both adults but only one eaglet. I'm pretty sure that if there were more than one in the nest two would be occasionally visible. The nest was also left unattended by both adults for about ten minutes at one point although one adult was in a nearby tree.

Posted by David Truland at 11:14 AM No comments:

A Time of Transition - Again

I may, or may not, be selling my 5D Mark III and a couple of my L lenses and using my crop sensor 7D and SL1 instead. There's a lot of money tied up that can't really be justified. In any case, I've been using both systems lately and here some of the results.


Posted by David Truland at 6:17 PM No comments:

Some Signs of Spring

For something different than the eagles and sports, here are some shots from yesterday morning. These were made up along the old Champlain Canal North of Waterford.

I'd probably end up choosing a good 50mm lens but when I bought a Minolta 9xi film camera after I had given up my manual focus Minolta X700 bodies, I bought it with a 100mm macro lens. Maybe someday there will be a 50-100mm f/2.8 macro lens with image stabilization.

Here are some of the results with exposure information.

Posted by David Truland at 6:49 PM No comments:

Email ThisBlogThis!Share to TwitterShare to FacebookShare to Pinterest
Labels: Closeup/Still Life
Newer Posts Older Posts Home
Subscribe to: Posts (Atom)
To view larger images simply click on the image then click on it again. You can then simply use the back button or swipe to go back to the blog.