It was a nice foggy morning for my walk around Waterford today. Here are some HDR shots. Keeping the text short to include more images. The usual 5D Mark III and 24-105mm lens.

Posted by David Truland at 6:21 PM No comments:

Fifty two days after the giant Boxelder started to come apart the entire tree is now done for. You can read about part 1 of the saga in a June 4th blog entry here. Today, I noticed that the rest of the tree had come down sometime over night or early this morning. We've had a lot of rain and I suppose the weight of the water and the loosening of the soil were factors although as you can see the roots pretty much just broke. Without the South trunk to balance the weight it was only a matter of time.

It was still drizzling as I took my 5D Mark III and weather sealed 24-105mm lens out to document. While the 5D series is not as weather proof as the 1D series, or even the 7D Mark II, I'm not concerned that some light rain or dripping will cause a problem. Here shots of the file of firewood waiting to be cut up. As the Boxelder is a member of the maple family it will be good burning assuming the right equipment is available. 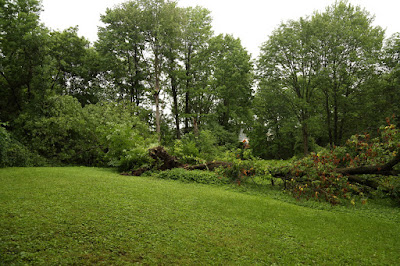 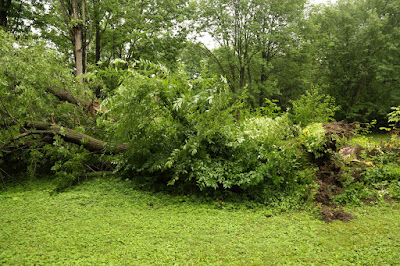 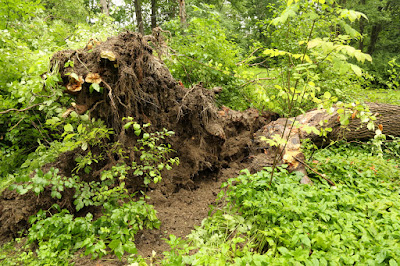 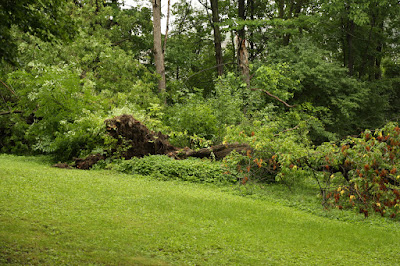 Posted by David Truland at 12:18 PM No comments:

Yesterday morning I walked around Peebles Island with my 5D Mark III with 24-105mm lens and 7D with 100mm macro lens. I wasn't happy with any of the shots from the 7D and macro lens. I'm a bit out of practice with real macro shots and image stabilization really isn't a substitute for a tripod.

The landscape setup on the 5D Mark III resulted in some decent shots. While I bracketed five files, I ended up processing less than five as the under exposed files were really dark. 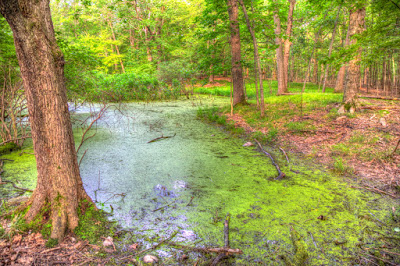 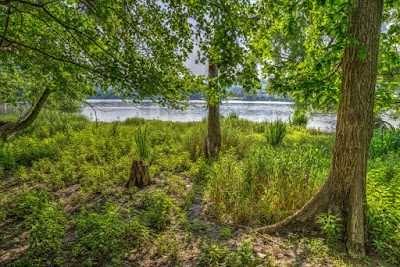 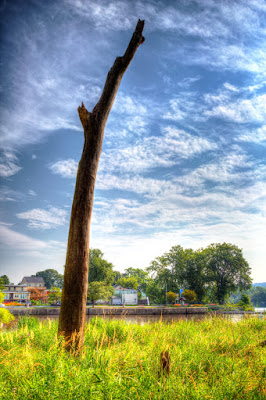 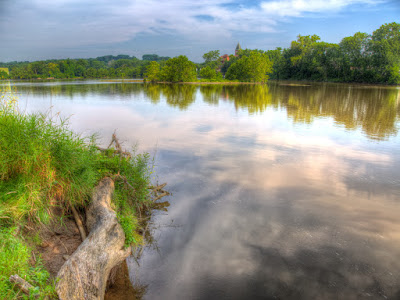 Posted by David Truland at 6:39 PM No comments:

Stages of a Bee Balm Blossom

I've been using my 100mm macro lens with my crop sensor 7D lately to see if that would pair nicely with my 5D Mark III and 24-105mm lens for event coverage and general walking around. On a crop sensor body the 100mm lens has the field of view of a 160mm lens on a full frame body. This can be an advantage as you don't need to be as close to the subject to have the subject framed the same way.

Canon makes a 180mm macro lens but it is f/3.5 and it doesn't have image stabilization. I'm hoping this will work out nicely.

This small patch of Bee Balm had blossoms in various stages of development. These shots were all made at the same time. All are at f/8 and ISO 100.  These are all full images with no cropping. 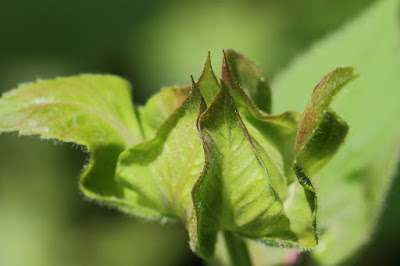 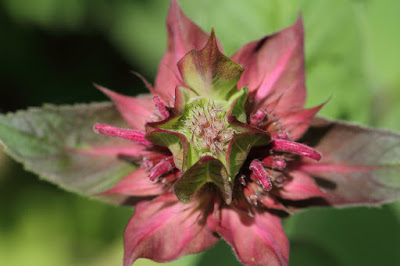 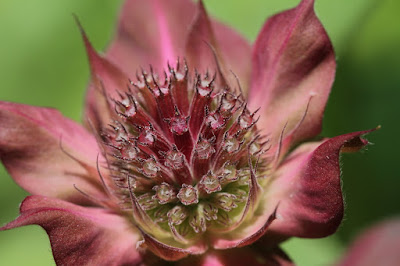 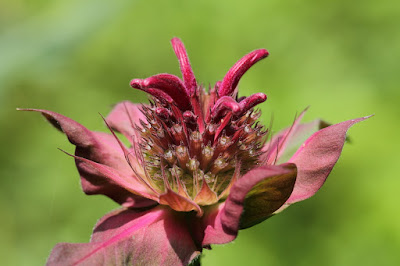 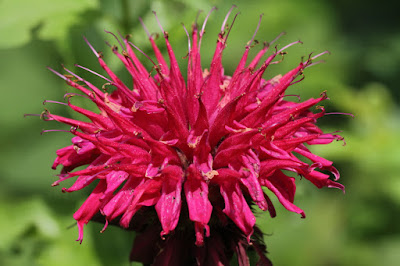 Posted by David Truland at 11:09 AM No comments:

The Lake Champlain Maritime Museum, located in Vergennes, Vermont, has a fleet of boats that operate on Lake Champlain as well as other waterways. This year, in honor of the 200th anniversary of the beginning of construction on the old Erie Canal, two of its boats, the schooner Lois McClure and the tugboat C. L. Churchill, are traversing the present day canal.

This weekend, the boats are tied up in Waterford, NY, the Eastern terminus of the Erie portion of the canal. You can read more about the museum, these boats and this years trip on the canal at http://www.lcmm.org/index.htm. 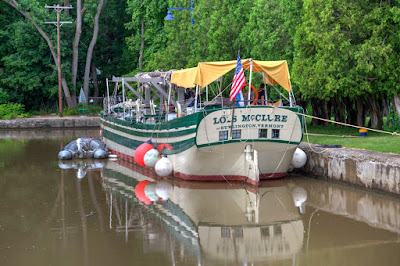 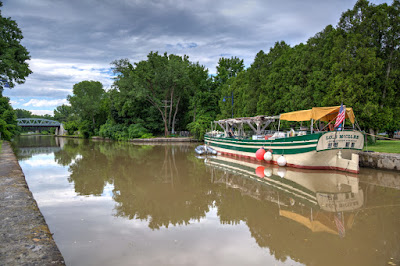 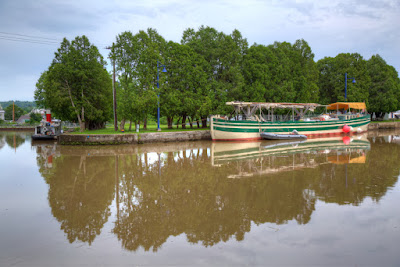 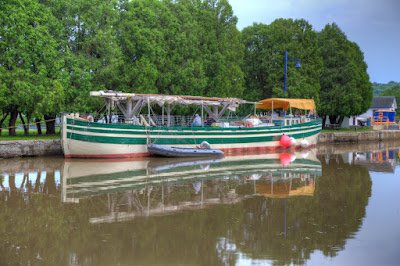 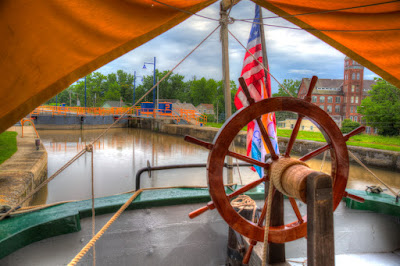 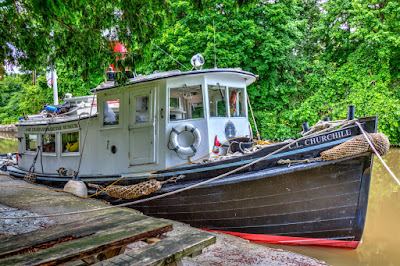 Posted by David Truland at 6:49 AM No comments:

As a followup to yesterday's post about high water, I'm including some shots of Cohoes Falls from late this afternoon. Late afternoon is the best time to get the rainbow in the mist, if you're in the right place and the wind is strong enough in the right direction.

I used a circular polarizer filter which, if I oriented it to darken the sky and accentuate the clouds, the rainbow disappeared. But, with it oriented to maximize the rainbow, the rainbow was more prominent than without the filter.

My tripods were in a different car so I had to rely on hand holding which isn't really a problem there except the higher the camera is the better the scene. You can only hand hold so high, especially while bracketing for HDR processing.

Here are three shots followed by a video. 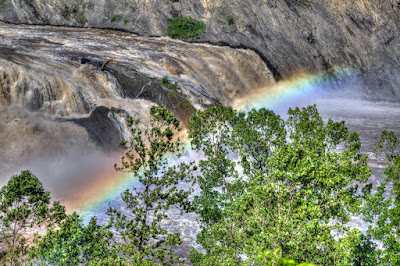 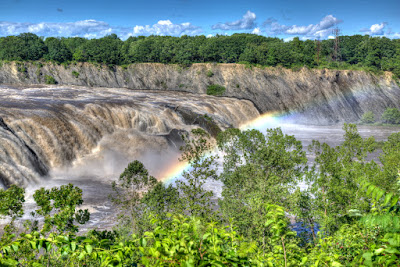 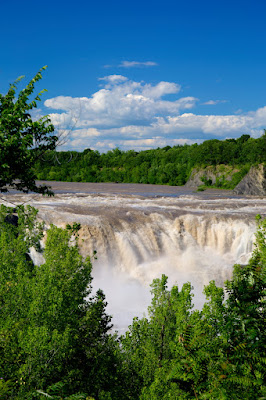 Apparently Blogger uses Flash for the videos which won't work on iOS devices. So, here's a youtube version of the video.

Posted by David Truland at 6:21 PM No comments:

Almost every day for the past handful of days torrential rains have passed through in the late afternoon or early evening hours - or both. There hasn't been a lot of wind, hail and lightning - just lots of rain.

The rain brought the level of the rivers up almost to the top of the wall in Waterford. 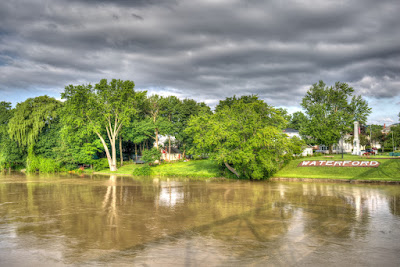 And here are some shots, also from this morning, showing the high level of the Hudson and Mohawk Rivers as the Steamboat Meet takes place at Waterford Harbor. 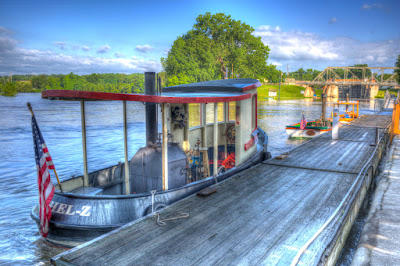 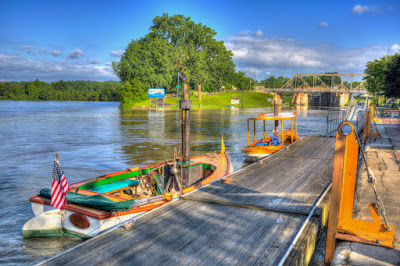 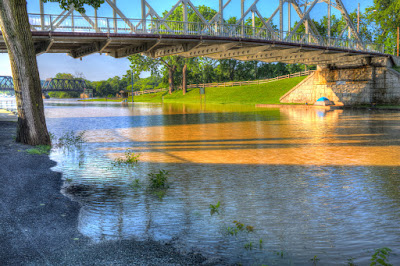 Here's a graphic from the National Weather Service showing rainfall totals from this system. All this area pretty much drains into the Hudson or Mohawk Rivers by the time they reach Waterford, the immediate Lake George area notwithstanding. 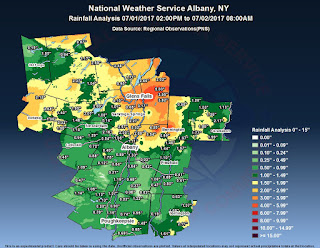 Posted by David Truland at 9:36 AM No comments:

Email ThisBlogThis!Share to TwitterShare to FacebookShare to Pinterest
Labels: HDR, Scenic, Weather
Newer Posts Older Posts Home
Subscribe to: Posts (Atom)
To view larger images simply click on the image then click on it again. You can then simply use the back button or swipe to go back to the blog.