On the 7th Day of Christmas

Posted by David Truland at 2:17 PM No comments:

On the 6th Day of Christmas

Posted by David Truland at 7:30 AM No comments:

On the 5th Day of Christmas


Posted by David Truland at 5:47 AM No comments:

On the 4th Day of Christmas

On the 3rd Day of Christmas


Posted by David Truland at 8:51 AM No comments:

On the 2nd Day of Christmas

Posted by David Truland at 12:21 PM No comments:

On the 1st Day of Christmas


Posted by David Truland at 4:08 PM No comments:

Email ThisBlogThis!Share to TwitterShare to FacebookShare to Pinterest
Labels: 12 Days

I've decided to attempt a photography project over the holidays. I'm aiming to post a photo each day of the 12 days of Christmas made with the EOS 5D Mark II and EF 40mm f/2.8 STM lens, the photo having been made that day or the day before.

I've separated out this camera and lens along with a 430EX II Speedlite, a lightweight tripod and some accessories in a Tamrac Velocity 5X (5765) shoulder bag. I bought this bag for $20 over the summer and despite missing the original strap and some of the inside dividers it fits this gear nicely. I'm not sure I'll use the flash but, you know, there was a space in the bag.

Someone had cut off the waist belt that is a part of this bag so the tripod, a Benro A150EXU, slides neatly into the space the stored waist belt would take up. Here's a photo of the gear. 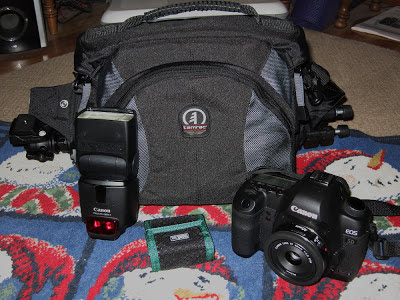 I got a bit of a head start yesterday by using this setup to photograph decorations at the church my family attends. Here is one of the shots I made. Some more can be viewed here.


I also made some iPhone wallpapers which work nicely for lock screens. To save, simply click on the photo twice and then right click to save. Put the photo in your iPhone library to use as a wallpaper.

Posted by David Truland at 5:32 AM No comments:

A Week 'Till Christmas

It seems quite difficult to get time to go out shooting lately. I'm still waiting for a nice snow to get on to Peebles Island for some Wintry trail scenics. I'm also still fiddling around with gear and bags.

Even my favorite Holly bush is conspiring against me with only the occasional berry here and there. Here's the best shot I could come up with this season.

Breaking My Kit In Two

I usually haul almost all of my gear (everything except chargers) around in a Tamrac Ultra Pro 13 shoulder bag. The gear really fills the bag and it weighs 30 pounds.

For the next couple of months I decided to separate my gear into two separate kits. I've done this before and always go back to the single bag within a few days. This time, though, my two smaller bags are more suited to their purposes and I hope I'll stick with it longer.

In the past, the smaller bags were either backpacks that had to be taken off to access the gear or slingbags that were so large they couldn't be worn comfortably. My solution at this point is a smaller slingbag and a compact but deep shoulder bag.

The slingbag is a Lowepro SlingShot 202 AW which fits my EOS 5D Mark II without the battery grip with the EF 24-70mm f/2.8L lens attached. It also fits the EF 17-40mm f/4L and EF 40mm f/2.8 STM lenses together with a 430EX II flash, filters, batteries, remote release and lens hoods. I also picked up a nice, light travel tripod, a Benro A150EXU, which attaches nicely to the side of the bag.

The shoulder bag is a ThankTank Photo Speed Racer V2.0 which fits my EOS 1D Mark III with the EF 70-200 f/2.8L lens attached with the EF 300mm f/4L IS lens alongside. It also fits a 580EX II flash with better beamer flash extender, EF 1.4XII extender and batteries for the flash and camera.

This nice shoulder bag also has a waist belt and is unique for its size in that it will hold a "pro sized" body and longer lenses.

While it is possible to carry both bags at the same time, the Speed Racer is the bag I took to New York City for the Photo Plus Expo and it weighs more in this configuration than it did on that occasion. After all, the single bag weighed 30 pounds and the only items of consequence not in one of the two smaller bags from that bag are a 430EX II flash, some light modifiers and a Timer Remote Controller.

The point to two bags is to separate out types of shooting and only bring what I plan on using. I can still always carry both bodies on the dual harness once I'm at my destination.

We'll see how long it lasts this time.

UPDATE: Well, here's the problem with the two bag system. You really need to have both bags anyway. If it's raining or snowing, for instance, and I want to shoot landscapes, I'll want the 1DIII and the 17-40mm lens since both are rain proof. For other purposes I might want the 70-200mm lens to pair with the 5DII.

So all you're doing by storing the gear in two bags is adding another bag to carry. So I guess it's back to one big bag, the Tamrac Ultra Pro 13, for storage with the smaller bags available for the various situations for which they might be useful. This large bag actually holds quite a bit more gear than the two smaller bags combined.

Posted by David Truland at 7:33 AM No comments:

Well, like only five months ago, one of the Decorah Bald Eagles has been electrocuted on a power pole. That's two out of the three from this year's brood.

D14 had been fitted out with a transmitter, so that future knowledge is now also gone. You can read more about this sad incident on Raptor Resource Project's blog, here.

Still alive, for now, is D1 - a female Bald Eagle hatched at the Decorah nest site in 2011 who also wears a transmitter. You can follow her travels here. D1 has been spending her Summers on Hudson Bay in Canada, returning to Iowa for the Winter.

The parent eagles are building a new nest near the old nest site in Decorah, Iowa so we may not get to see the nest like in the past. Not necessarily a bad thing if they keep getting killed off like this year.

Below is a video of the first branching of the eaglets from June 9, 2012.

Posted by David Truland at 8:59 AM No comments:

Yesterday morning was the first time there was snow in the air and on the ground. An accumulation of about an inch covered everything.

Instead of going out shooting, however, I decided to watch my Hammers defeat Chelsea Football Club 3-1 in an exciting East v. North London Derby. By afternoon, the snow was no longer pristine and fluffy.

I did, however, manage to document the first snow of the season and an Eastern Gray Squirrel with a Maple tree as a backdrop.

Posted by David Truland at 9:42 AM No comments:

Email ThisBlogThis!Share to TwitterShare to FacebookShare to Pinterest
Labels: Weather, Wildlife
Newer Posts Older Posts Home
Subscribe to: Posts (Atom)
To view larger images simply click on the image then click on it again. You can then simply use the back button or swipe to go back to the blog.