There have been some changes since I posted a picture and list of my current equipment back in August. You can read that blog entry here.

I've also decided to keep the first generation 1.4X extender in order to have one for each of the "white" lenses, just in case. Here's a picture of the current kit, minus items like filters, remotes, etc.

Posted by David Truland at 3:32 PM No comments:

I was out hiking yesterday with a 5D and the 300 f/4L IS with the 1.4X extender on a monopod. There wasn't much in the way of wildlife to shoot so I fooled around with making closeup pictures of fungus, moss, etc.

As I wasn't intending to shoot closeups, I didn't have a tripod and even with the monopod and image stabilization I needed to keep the shutter speed up to prevent blurring. So, even at ISO 400, I couldn't go with an aperture smaller than f/8. The picture below of hair-capped moss shows how narrow - or shallow - the depth of field is at that magnification.

Posted by David Truland at 8:06 AM No comments:

Just two closeups of ornamental grass tassels. It's nice to enjoy being outdoors with the temperature in the 60s. Pretty soon it'll be snowing again.

These were taken with the 5D and 100 macro. I may just hang on to that lens. 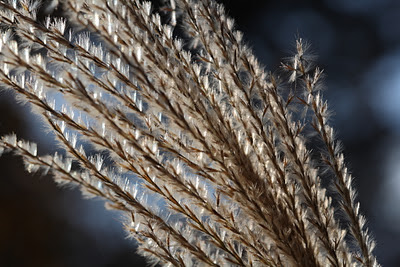 Posted by David Truland at 6:55 AM No comments:

Email ThisBlogThis!Share to TwitterShare to FacebookShare to Pinterest
Labels: Closeup/Still Life
Newer Posts Older Posts Home
Subscribe to: Posts (Atom)
To view larger images simply click on the image then click on it again. You can then simply use the back button or swipe to go back to the blog.