Wildlife tend to be most active when, and where, the outdoor lighting is less than optimal for using long lenses with sufficiently fast shutter speeds. The Better Beamer flash extender is a great tool for outdoor photography in poor lighting such as under a tree canopy, on cloudy days or at dusk or twilight. 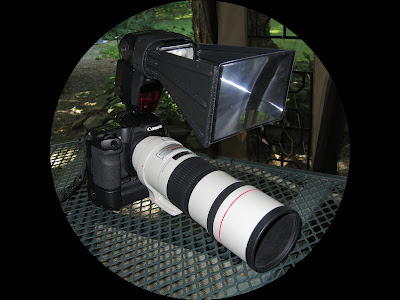 A few weeks ago I was trying to find out how close I could get to an Eastern Chipmunk with the outfit shown above, without the flash. I could get close to the minimum focusing distance of the lens but in the lighting under a tree canopy I had to shoot wide open and at a higher ISO in order to keep shutter speeds high enough to get a sharp image. And a lot of the shots were fuzzy due to camera and/or chipmunk movement. Here is an example of the results:

Yesterday, with the flash and extender added to the setup, I was able to use a lower ISO and stop down to f/8 for greater depth of field. I was not as close, which also helps with getting more of the subject in focus. None of the chipmunk photos are cropped. Here are two examples:


For another illustration of the difference the flash extender makes, I shot some hosta about 25 feet from the camera location first without and then with flash. Here are the results:


One thing the flash does is even out the light so that background highlights are not blown out as they can be when the camera is metering a darker area.

You can shop for your own Better Beamer flash extender at Adorama here.

Posted by David Truland at 5:34 AM No comments:

I posted about combining my EF 300mm f/4L IS USM lens with a Canon 1.4X extender in A Practice Day. The other day I was thinking, why stop there?

I have two Canon 1.4X extenders and while you can't connect them directly to each other because of the way they are designed, adding a short 12mm extension tube between the extenders makes it possible. What I didn't know was how it would work.

Here's how the set up looks on the 50D. The lens, and body caps are all from this combination of lenses, not even including the Promaster extension tube. I left this photo full size so you can zoom in to see the details. 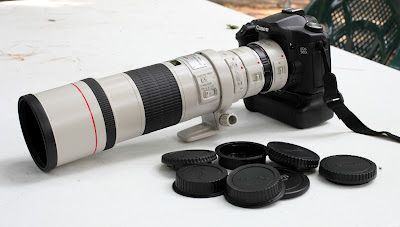 The extension tube, in addition to allowing the extenders to be stacked, shortens the minimum focusing distance to about 3 feet. But, it also eliminates focusing at infinity. The farthest this setup will focus is about 115 feet. But remember, the goal here is to photograph insects and small birds - not the moon.

While autofocus still functions with this setup it isn't accurate as the extension tube moves the plane of focus forward. It's possible, however, to get close with autofocusing and fine tune by turning the focusing ring on the lens. As I use back button focusing, this isn't a problem. People who keep the focus activation on the shutter button would have to switch the lens to manual focus.

Image stabilization still works fine and is a big help. All of these sample photos I took hand held. In general, I think image quality is pretty good. At least close up. I expect that most use will be between 5 or 6 feet and 30 or so feet.

The three images below show the farthest and closest focusing distances and a distance of about 12 feet, respectively. All images are taken at what the camera shows to be f/8, but which, in reality, is f/11. Only one extender is taken into consideration by the camera. The image taken from 12 feet, however, is shot wide open, which would be equivalent to f/8, while the camera showed f/5.6. All are at ISO 800.


And here are two images that show the combination at a range of about 6 feet. 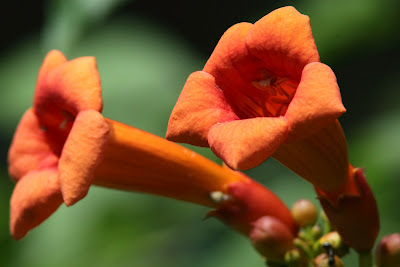 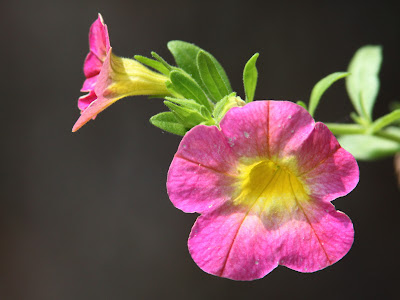 My next project, which I have tried out but not documented, is to combine the two extenders with two extension tubes and the 40mm pancake lens to make an 80mm macro lens.

Posted by David Truland at 5:35 AM No comments:

Over the past few days I've run across situations where reflections have played a part in the photographs.

Last weekend I was walking around Peebles Island with a landscape setup and saw numerous Great Egrets flying around over the Mohawk River. I went back the other day with longer lenses and saw only one Egret walking around on the other side of the river. But, since I'd already lugged a monopod and gear over there, I spent some time waiting for interesting poses and reflections in the pools of the mostly dry river bed.

The other situation was while driving home on Sunday evening and there was a superb sunset. Luckily, I had my gear in the car and jumped out at a boat launch to capture some nice sunset reflections. The scene is of Peebles Island and Waterford from across the Hudson River in Troy.

Posted by David Truland at 6:46 AM No comments:

Some New Gear for the Mid Year

On New Year's Day this year I posted a Blog entry titled Old Gear for the New Year. I related my "gear journey" up until that time and resolved "to stop thinking about gear so much and, having built a system that should be capable of some good photography, go and make some good photographs." My plan was to be using the same kit on July 1 as I was on January 1.

Well, not exactly. Lens wise, I did add an EF 50mm f/1.4 USM to use with full frame bodies as a setup for street photography. Then Canon came out with the EF 40mm f/2.8 STM, which is great for that kind of shooting, and which has replaced the 50mm. So, as far as lenses go, I have simply added the 40mm pancake to my bag since January 1.

WIth respect to camera bodies, changes were made to upgrade quality. When Canon announced the 5D Mark III and it began to become available it was time to get a 5D Mark II. The other change is that I recently replaced the 30D I picked up for sports and wildlife with a used 50D from LensRentals.com. So, instead of two 5D bodies and a 30D (which I wasn't actually using), I'm now using a 5D Mark II and a 50D. As was the case with the 30D and 5D bodies, these two cameras pair quite nicely as they are very similar in terms of interfaces and features. Both are two generations of processor upgrades and add features like live view shooting, automatic sensor cleaning, autofocus micro adjustments, etc.

The day after the 50D arrived I walked around Peebles Island with my 300mm f/4 on the 50D and my 24-70 f/2.8 on the 5D Mark II. Here are two shots that show the extremes of my focal length/field of view options these days. The first shot is made with the 5D Mark II and the 24-70mm zoom lens at 24mm. The second shot is the 50D with the 300mm lens and 1.4X extender, the equivalent of 672mm with the crop sensor factored in. Both shots are centered on the old mill towers in Cohoes. These are the original images, no cropping.


And, I did manage to capture a deer in the middle of a trail for my Peebles Island Trail Scenics Project. This was taken with the 50D and the 300mm lens and is not cropped at all. I probably should have either used f/4 or raised the ISO up to 800 or both. A shutter speed of 1/20 second is way to slow to be hand holding, even with an image stabilized lens. The shot is a bit fuzzy and probably wouldn't be suitable for a large print.

Posted by David Truland at 6:16 AM No comments:

I've posted a couple of times about the Decorah eagles which we were able to watch in the nest thanks to the Raptor Research Project. They announced today that the first eagle hatched this year, D12, was found electrocuted at the base of a power pole.

All I can say is it makes me very sad. Here is a screen capture of what I think is D12. The scene is from before D14 hatched so I've got a 50% chance of being right. This capture was made back in late March. 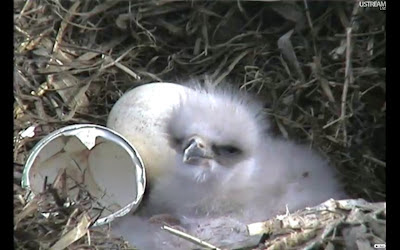 Here is a screen capture of D12 from June 10th. 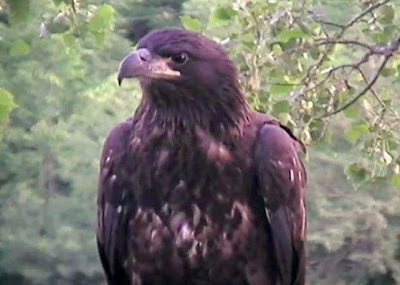 Posted by David Truland at 8:13 PM No comments:

I like photography projects, which I define as a series of photographs made over a period of time designed to tell a story which none of the single photographs could tell on their own. For me, having a project serves both as a focus for photography and motivation to make photographs.

I blog approximately once a month about my Peebles Island Trails Project which is a year long project, begun in March, documenting the trails on Peebles Island State Park in Waterford, New York. There is a link to that project on the right.

Another project I've started began when I was shooting Spring foliage following a light rain back in May. I posted a couple of photos in a blog post which you can read here.

Since then I've followed the end of a single Red Pine branch at it emerges it's new growth. I now have seven photos in the series beginning on May 1. You can visit the project here. There is also a link to this project on the right.

Following are four samples from the project showing the progress of the branch. The current view really hasen't changed since the last photo shown here. We'll have to see what happens over the course of the summer.

All photos are made with a Canon EOS 5D Mark II and EF 300mm f/4 IS USM. I try to keep the vantage point similar but, depending on highlights in the background, I sometimes need to move closer or farther away from the branch. I then crop to somewhat standardize the size of the subject in the frames.

Posted by David Truland at 7:27 AM No comments:

Email ThisBlogThis!Share to TwitterShare to FacebookShare to Pinterest
Labels: Closeup/Still Life, Misc.
Newer Posts Older Posts Home
Subscribe to: Posts (Atom)
To view larger images simply click on the image then click on it again. You can then simply use the back button or swipe to go back to the blog.