The other lens I mentioned last time as being very useful with my crop sensor 7D bodies is the Sigma 10mm fisheye lens. This is also an f/2.8 lens and as such is fast enough for use indoors for events.

My widest lens other than this lens is presently the 24-70mm which has a full frame field of view of 38mm at its widest end. This fisheye lens is a nice alternative in tight quarters and is capable of all kinds of different "looks" depending on how the shot is composed. Flat lines will curve if placed near the top, bottom or sides of the frame but if kept toward the middle, the scene can appear as if shot with a normal wide angle lens.

This first shot illustrates that effect as the island and bridge appear normal but the straight edge of the wharf is massively curved. 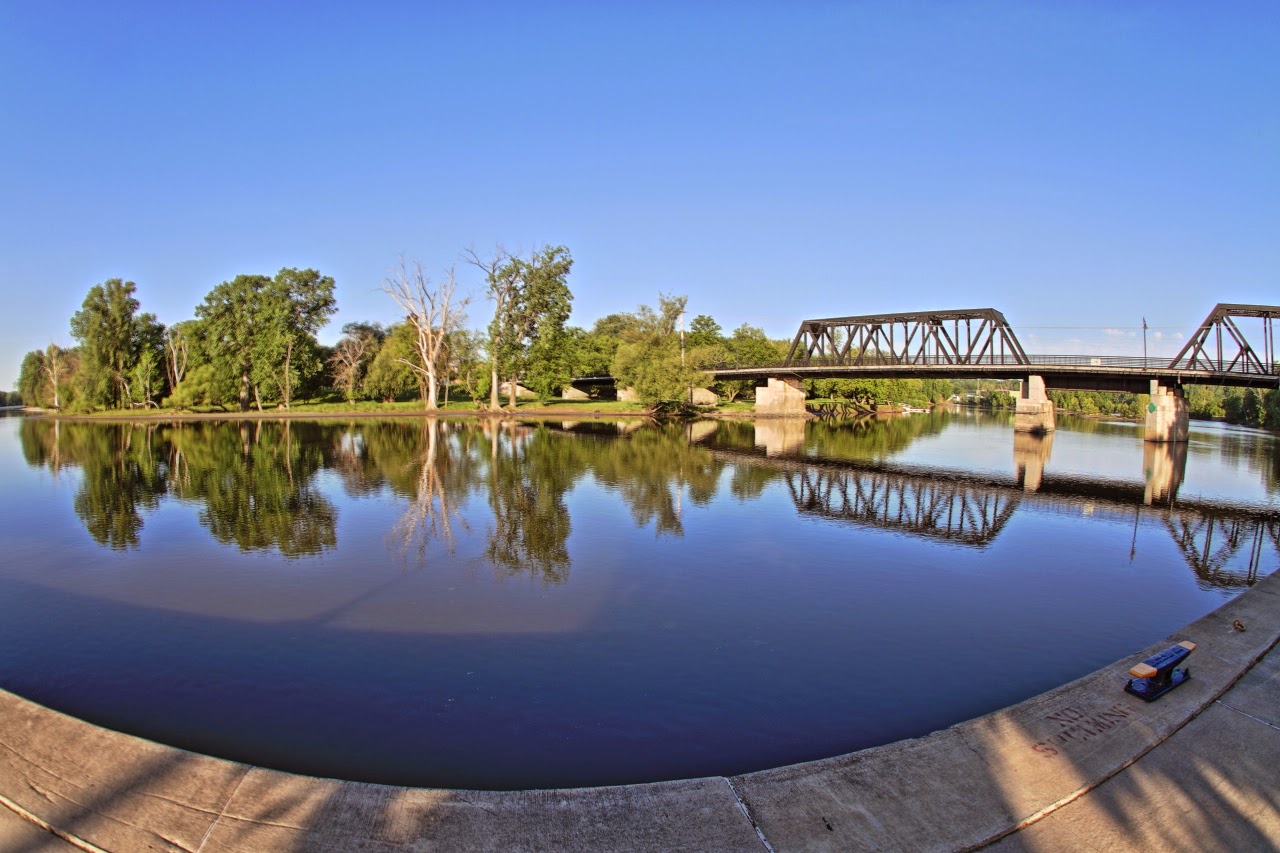 Similarly, the vertical lines toward the center of this scene of lock E-2 are straight while vertical lines more toward the edges appear curved. Objects closer to the lens also will curve more than objects at a distance as the tower on the Ursula of Switzerland building illustrates. 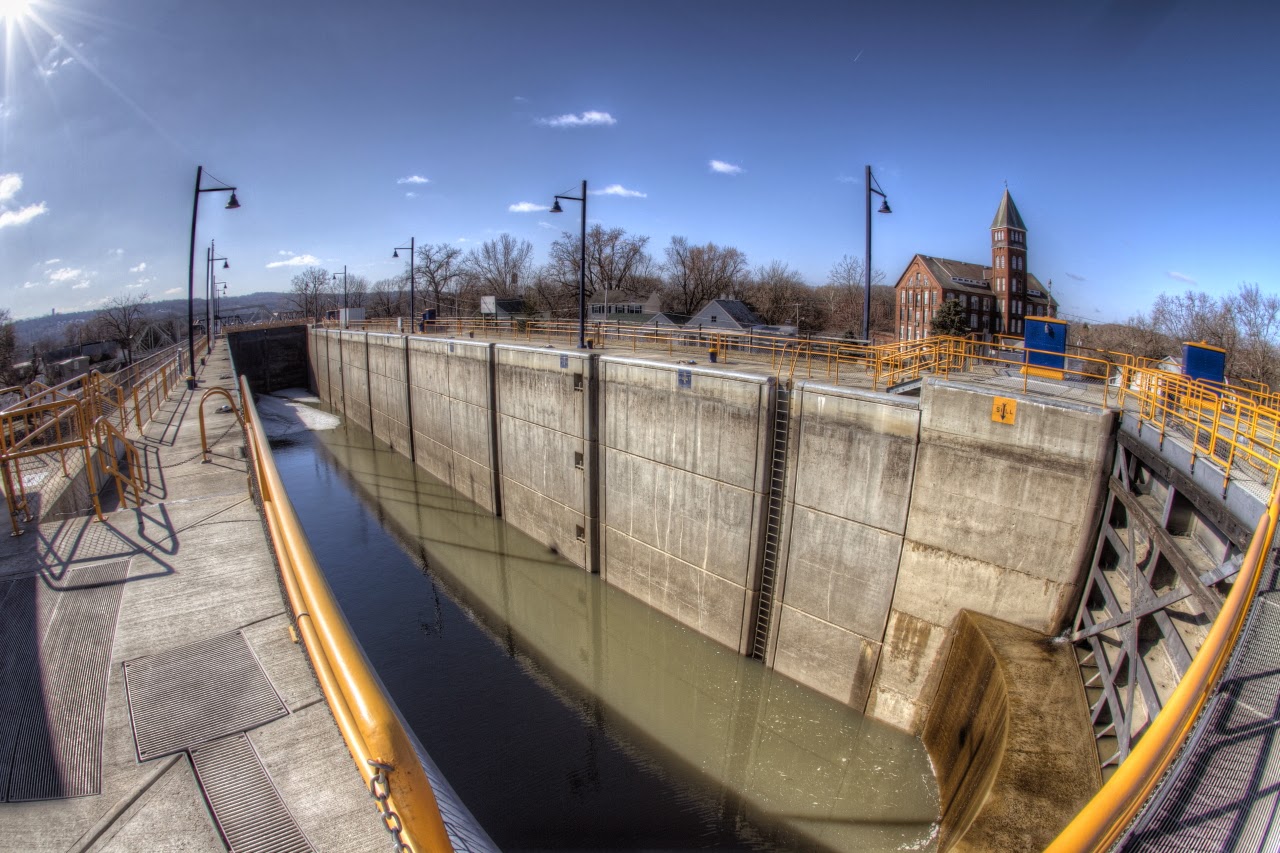 As I mentioned, this lens is relatively fast and is useful for indoor shots. This shot of an Easter morning service was made at f/2.8, 1/30 second at ISO 800. 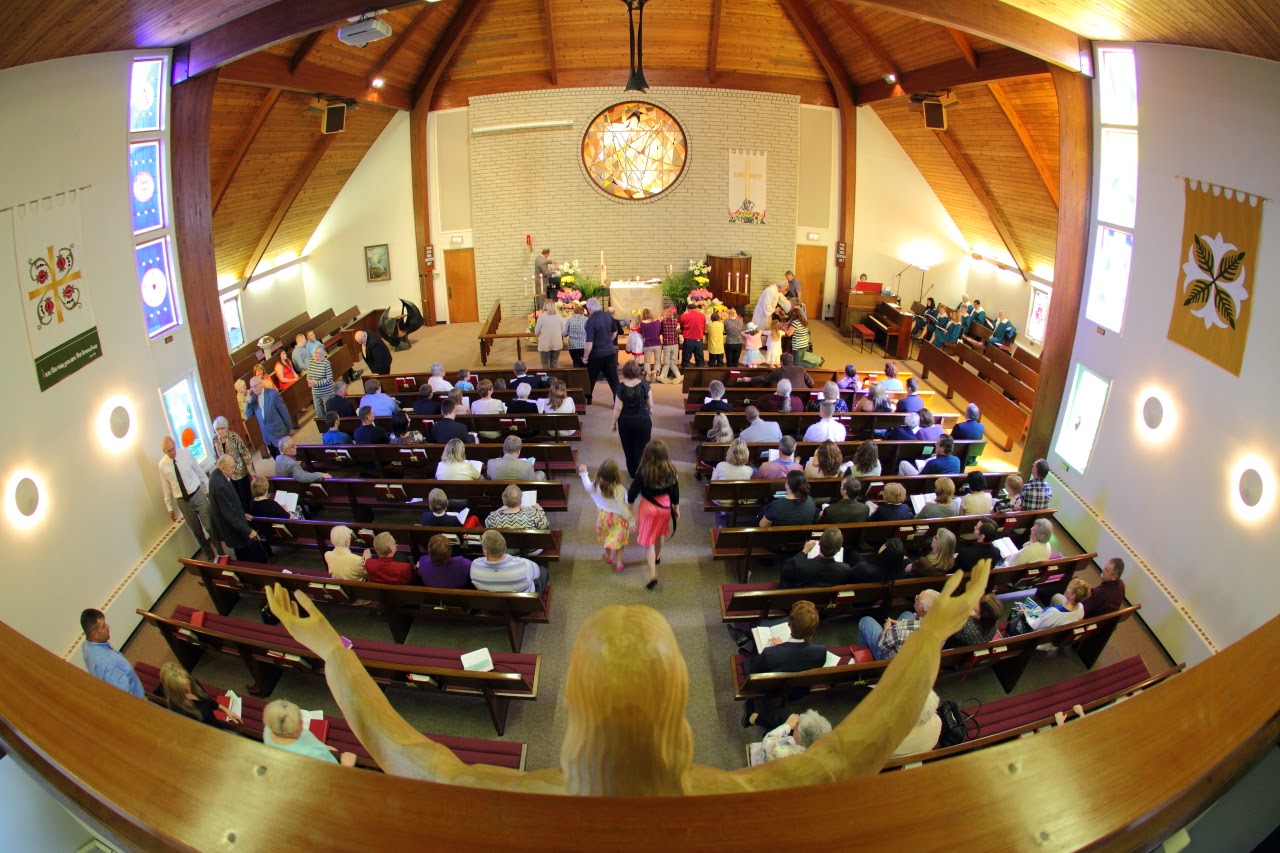 For this shot of the third branch of the Mohawk River from Van Schaick Island, I was standing right next to the white rock in the foreground. I would have liked to compose a little more to the left but my shadow was just to the left of the frame. This shot has a natural look to it due to the lack of straight lines except for the trees, which don't look at all unusual if they are bent a bit. 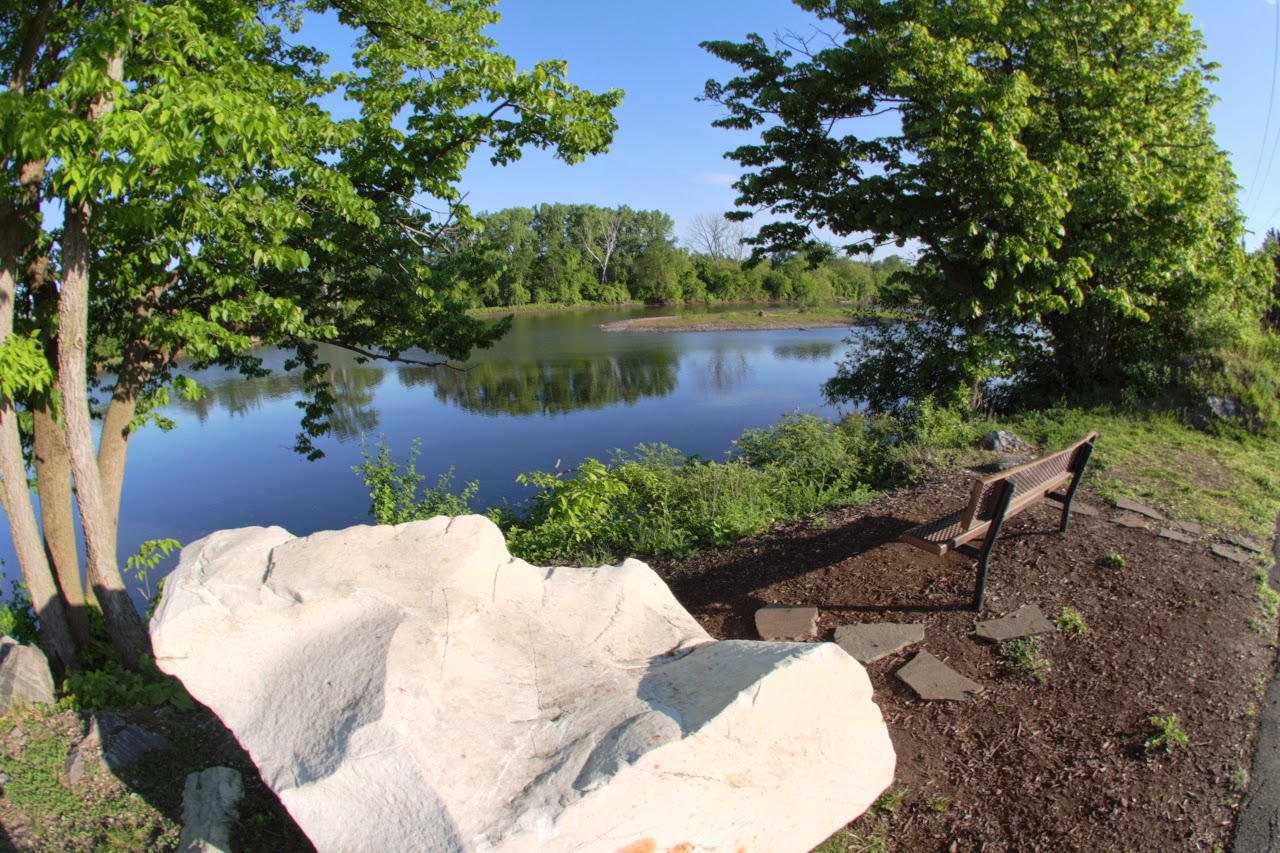 This shot of the same scene, after several days of rain, was made with the 40mm pancake lens which has a full frame field of view of 64mm. I had to stand back about 10 feet from the rock, across a path to get both the rock and bench in the frame.

I always thought this would be a nice location for an engagement shoot with the couple sitting on the rock. 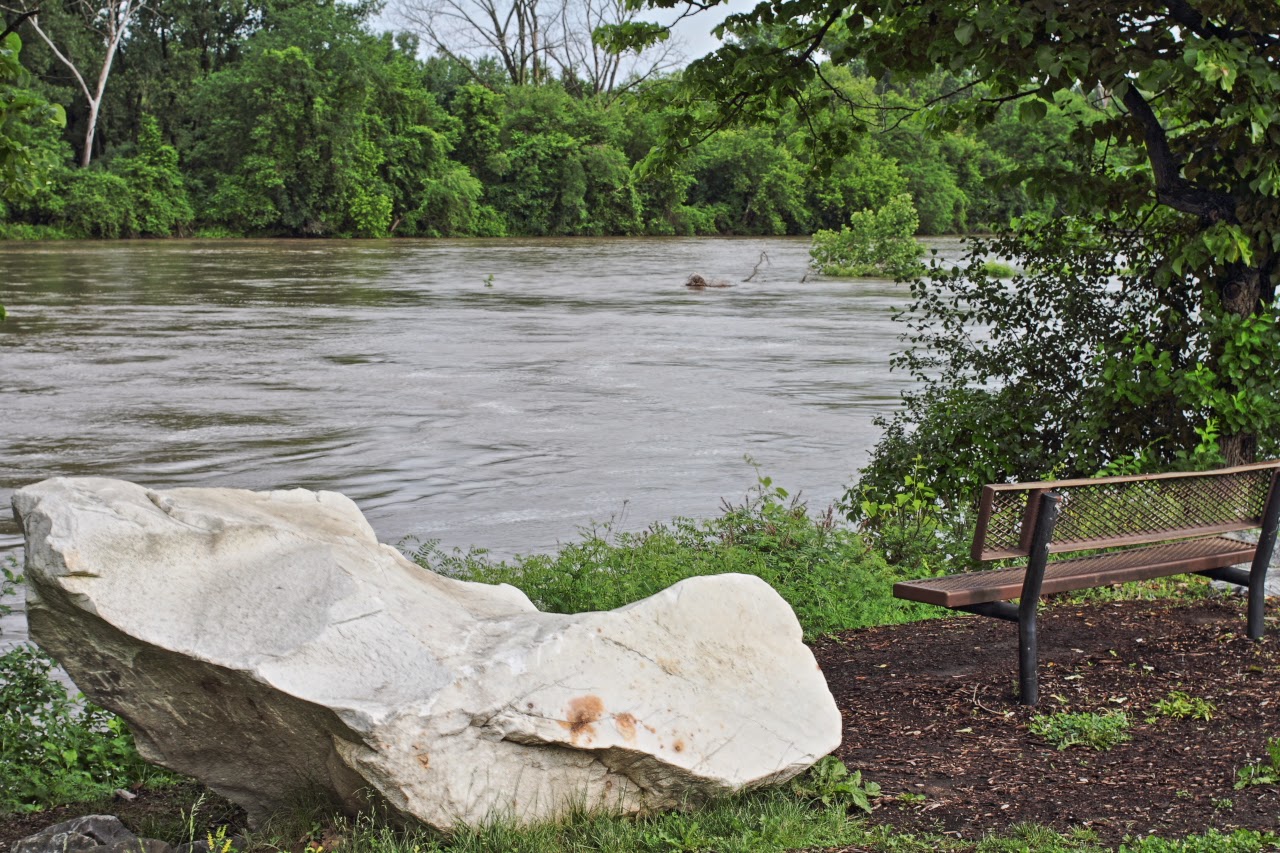 Posted by David Truland at 11:07 AM No comments:

Now that I am using two EOS 7D bodies, I can embrace lenses designed for the smaller sensors of these cameras, lenses I couldn't use with my full frame bodies. The two lenses of this type I currently own are the Sigma 10mm f/2.8 EX DC ESM Fisheye and the Canon EF-S 60mm f/2.8 Macro USM.


Obviously, with shutter speeds as long as 6 seconds, a tripod and remote release was essential for the above images. Macro lenses are also good for other types of photography, however. This lens makes a particularly nice portrait lens, for instance, and can also be used for landscapes.

The image below was able to be successfully bracketed without a tripod due to faster shutter speeds because of the brightness of the scene and the 8 frames per second shooting speed of the 7D which limits camera movement between shots.

Posted by David Truland at 6:22 AM No comments:

Email ThisBlogThis!Share to TwitterShare to FacebookShare to Pinterest
Labels: 3 Primes, Closeup/Still Life, Daily Walk, Gear, HDR, Peebles Island, Scenic
Newer Posts Older Posts Home
Subscribe to: Posts (Atom)
To view larger images simply click on the image then click on it again. You can then simply use the back button or swipe to go back to the blog.