I was walking this morning along a path adjacent to the old Erie Canal which now serves as overflow for the New York State Barge Canal as locks empty and fill. At one point, there were a number of adult geese and goslings on the path and they were not about to move. The adult geese were hissing at me and I didn't really want to find out what they would actually do if I got too close.

So, I took a couple of pictures and walked down the hill to the right and around the geese.


A little farther on, I ran into some other geese but the trail was more open and I didn't have to get too close to them. I liked the backlit silhouettes of the goslings. I was shooting almost directly into the sun and there is a bit of flair in the upper left corner of the image. If I had been using my 24-70 zoom instead of the 50mm prime lens there undoubtedly would have been much more flare.

Flash - It's Not Just for Indoors

I've been reading up lately on using flash units to modify available light. This, of course, is what all artificial light photography does whether it's studio strobes, flood lighting, flash units or a camera's built in flash. How you can use the artificial light varies greatly depending on what tools you're using.

The DSLRs I'm currently using do not have built in flashes. I shoot mostly outdoors or on location so I'd have little use for studio strobes or floods which need either AC power or large battery packs. And, I really don't know how to use them anyway. Maybe someday.

Canon calls their system of flash units Speedlites. You can see what their lineup of Speedlites and accessories consists of on their web site here.

In addition to providing extra light for indoor photography, flash can be used to even out lighting in a harsh outdoor environment. I was taking pictures prior to a prom last weekend on a very sunny day in the late afternoon. The lighting choices were bright sun, shade with sunny background or backlighting from the sun. Flash was vital to fill in shadows and provide light in shade.

Here are two similar shots, the first without flash and the second with a Canon 430EX II Speedlite on the camera:

In this photograph, the shade took care of the harsh sun on the subjects but without flash, if the subject were properly exposed, the background would be totally washed out.

And finally, in a backlighting situation, flash is needed to, again. light the subject and prevent blowout of the backlit highlights in the hair.

Yes, I realize there's distracting background. With over 100 people milling about it was difficult to catch just the right moment.

Posted by David Truland at 6:15 AM No comments:

The past two times I'd been on the Eastern shore of Peebles Island, I had startled a Bald Eagle from its perch on a tree in front of me. So I thought I'd take a break from making trail scenics and carry a setup more suitable for birds.

I didn't see the Bald Eagle yesterday, but there's a Double-crested Cormorant rookery on an Island across the Mohawk River from Peebles Island and the juveniles were practicing flying around. So, I took the opportunity to practice BIF (bird in flight) photography with my 5D Mark II and 300mm f/4 with 1.4X extender.

I spent about a half hour on the cliff overlooking the Mohawk River tracking Cormorants as they left the trees, flew over the river and returned to the trees. The equipment I was using is not ideal for this type of photography. The autofocus system on the 5DII is not as fast or sophisticated as on the 1D series or the 7D and using an extender slows it down even more. But, in good light and with practice, it's possible.

With the 420mm focal length lens with a full frame camera I still wasn't really close to the birds so I cropped quite a bit to get a nice shot. Here's an original frame followed by the crop. 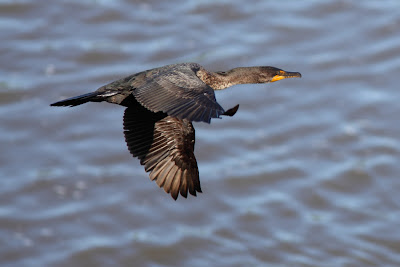 Juvenile Double-crested Cormorants have lighter plumage than the adults, which are mostly black. You can read more about this bird here.

The Phlox are starting to bloom now and I took the time to get some closeups with the same gear I was using for the birds in flight. Both are hand held, relying on a relatively fast shutter speed and the image stabilization to control camera movement.


When making closeups like this the background is very important. I took some time to make sure that there were no highlights to distract attention away from the flowers. The deep shadow in the second photo was only a small area and I had to maneuver precisely to keep background light out of the shot.

Posted by David Truland at 5:38 AM No comments:

Lots of green and blue colors on the Peebles Island trails this morning. Here's just a quick glimpse of the same scene in horizontal and vertical formats.


Posted by David Truland at 9:23 AM No comments:

Cropping is defined by Wikipedia as "the removal of the outer parts of an image to improve framing, accentuate subject matter or change aspect ratio." My only quarrel with this definition is the inclusion of the word "the" before "outer parts". While all cropping does involve removing outer parts of an image, frequently much of the outside of the original image is left intact.

The described reasons for cropping are well put except "and/or" might be more accurate than "or" since frequently there is  more than one purpose for cropping an image. For instance, the Eastern Gray Squirrel peering from the hole in the tree is hardly noticeable in the full frame image. By cropping to a vertical format not only is the squirrel more visible but the composition improves greatly.

Remember, as always, if you click on a picture then click on it again, you will see it the full size I have posted, which is usually around 1200 pixels on the long side of the picture. 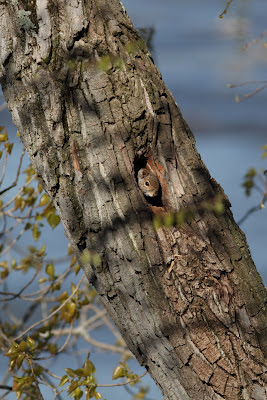 The next photo was made with a Canon Powershot S100 on one of my daily walks. The S100 only has an equivalent focal length of 120mm on the long end of it's zoom. Cropping can appear to bring the subject closer to the camera. Plus, altering the aspect ratio to 3:2 rather than the S100's 4:3 can make the shot look less like it was taken with a compact point and shoot camera. 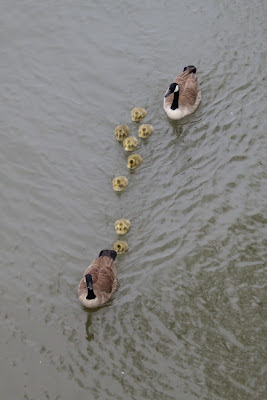 The next shot was cropped simply to get rid of distracting elements. Only the sides were cropped. Of course, I should have been shooting vertically anyway. But, the vertical grip for this camera had not arrived yet and I wasn't in the mood to stand with my hand wrapped around the top of the camera all afternoon. If I had been shooting vertically we might even be able to see the ball. 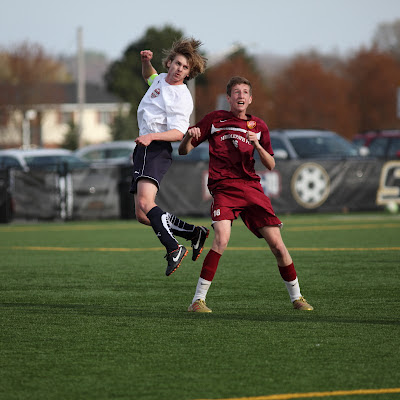 And, of course, there is extreme cropping where you can just cut out a portion of the image and pretend it was taken with a $13,000 super telephoto lens. Here is the squirrel from above cropped to100%. By the way, if you win the lottery and want one of those $13,000 lenses, you can buy one here. 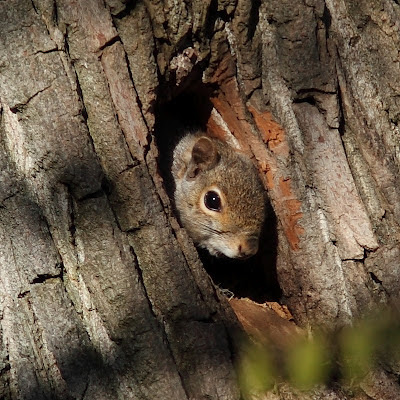 Posted by David Truland at 6:00 AM No comments:

Back on April 20th, I mentioned that since March 1st we had received 1.68 inches of rain compared to 5.24 inches in a normal year. In the 12 days since then, we've received 3.37 inches of rain, including a little over a half inch yesterday.

While precipitation is still below what is expected for the season, things are starting a look more normal. Rainy, overcast weather can be excellent for foliage pictures. The foliage itself is healthy looking, rain adds an element of reflection and the lack of bright sun makes colors appear more vibrant.

Here are two examples from yesterday. The first is a Red Pine and the second an Oak.

Posted by David Truland at 6:03 AM No comments: