I was out with my EOS 7D and 70-200 f/2.8L IS II lens with the 2X extender attached looking for a particular butterfly I had seen when I spied one of my favorite insects feeding on some bee balm. The Hummingbird Moth, or Common Clearwing (Hemaris thysbe), is a member of the sphinx moth family and I was lucky enough to have a pair of them flitting around for quite a while.

As the photos show, the reason for both of its names are obvious. You can learn more about this interesting insect from Massachusetts Audubon here.

These images are not cropped at all and, in fact, the only post processing I did was adjust the white balance a little and add a small amount of sharpening as is usually a good idea with EOS 7D files. All three were made with the EOS 7D and the EF 70-200mm f/2.8L IS II lens with Canon Extender EF 2x II, hand held using spot metering and AI Servo Auto Focusing.


Posted by David Truland at 5:41 AM No comments:

Yesterday, I hiked up along the old Champlain Canal North of the Village of Waterford. It's a nice gravel trail on the old canal towpath. After about a mile, the canal, which serves as overflow for the current canal system, fills in with cattails right before an old lock.

I was hiking with the EOS 5D Mark II and EF 70-200mm f/2.8L IS II in my Think Tank Photo Digital Holster 50 V2.0. The shots of the lock below are three file HDR processed images while the cattail design image, which I'm currently using as a background on my MacBook Pro, is a single file.

Posted by David Truland at 5:11 AM No comments:

Splitting My Gear in Two - Yet Again

I realize that I've tried to separate out my gear into two mostly separate kits several times before, only to return to the single bag theory after only a day or two. The motivation remains the same.

A large thirty pound bag is unwieldy and to pack up a separate bag with some of the gear on each occasion takes time. The two bag theory is to create two kits that have a function on their own but when everything is needed, it is easy to use both bags.

My current plan, in effect for several days now, begins with a Think Tank Photo Streetwalker Pro backpack. Over the years, I've wanted a backpack large enough to carry two bodies, some lenses with hoods, a flash and accessories. My previous attempts, a Lowepro Slingshot 300 AW, Tamrac Evolution 9 and Adventure 75, a Think Tank Photo Streetwalker and a Lowepro Slingshot 202 AW all were nice bags but all had a fatal flaw and failed to meet my needs. The TTP Streetwalker came closest but does not fit a pro sized body.

The only downside of this bag is that, unlike some of the others, you need to take it off and lay it down to get at the gear. But, my Think Tank Photo Speed Racer 2.0 and Digital Holster 50 2.0 will see use for when quick access is necessary.

The second kit consists of the EOS 60D without a grip, EF 17-40mm f/4L and EF 50mm f/1.4 lenses, a 270 EXII speedlight (which can be controlled by the camera as a slave and can also fire the camera remotely), extra batteries for the flash and camera and a charger for the camera batteries in a Tamrac Adventure Messenger 4 shoulder bag. This bag will not always be brought along but will sometimes see use on its own. In its current configuration this bag weighs 5 pounds.

The only items of consequence previously in the single 30 pound bag not in one of these bags are a 580 EXII speedlite, a 77mm Canon 500D closeup lens, an anti-fog eyepiece for the 7D and 4 AA batteries. And while the closeup filter, in particular, is fairly hefty, the main weight savings is in the bags themselves. The single bag, the Tamrac Ultra Pro 13 weighs almost 6 pounds empty. The Think Tank Photo backpack about half that.

Time will tell whether I stick with this system or not but, so far, it seems to be working.

UPDATE #1 7/22/13: Although I am sticking with this system I have modified it a bit by removing the flash and batteries from the backpack, storing them in the bag with chargers and light modifiers, and adding the 500D closeup lens and anti-fog eyepiece to the backpack.

UPDATE #2 7/29/13: I am sticking with the two bag system but have modified the plan a bit. Instead of the Think Tank Photo backpack, I've returned the 7D and 5DII kit to the Tamrac Ultra Pro 13. This allows me to include the flashes and the closeup lens, etc. in one bag, eliminating a separate bag for lighting. The backpack will be used whenever I need to move around with some of that equipment.

I am also shifting the 50mm f/1.4 lens from the 60D kit to the larger kit and replacing it with an EF-S 60mm f/2.8 Macro USM lens. My Lowepro SlingShot 202AW will serve the function of the larger backpack with this smaller kit which will include my small Benro tripod.

UPDATE #3 8/21/13: Well, after moving the larger portion of the kit back to the Streetwalker Pro in a slightly different configuration and replacing the Tamrac Adventure Messenger 4 with a Think Tank Photo SubUrban Disguise 20, I've moved the contents of both bags back to the Tamrac Ultra Pro for storage purposes. The other two bags are nicely set up now for quick loading as needed and with everything in one bag, there's not the incentive to get more lenses so each bag can duplicate the functions of the other. 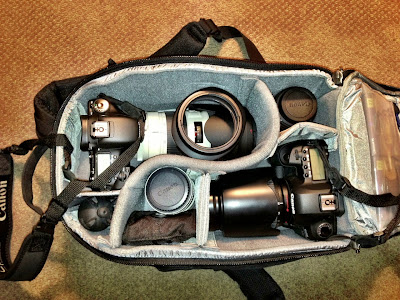 Posted by David Truland at 7:22 AM No comments:

I decided to head back to the Steamboat Meet at Waterford Harbor this morning to get some closeups of the steamboats on the water. I also decided to lighten my load a bit so instead of the ten plus pounds I carried yesterday morning I cut that by more than half by carrying only the 60D and the 70-200mm lens.

I figured the crop factor of the 60D wouldn't be a problem since I was looking for boats out on the water anyway. As all these shots were with the same setup I'll just include focal length and exposure information in the caption.


Posted by David Truland at 1:01 PM No comments:

I walked over to Waterford Harbor this morning with my 5D Mark II, EF 70-200 f/2..8L IS II and EF 24-70 f/2.8L. This weekend is the annual Steamboat Meet held over the July 4th weekend. These are some really cool boats and I've been getting shots of them for years. Even my old G6 has gotten into the act for these boats.

This morning, however, was my first chance to really test out the new zoom. This new lens is noticeably larger and heavier than my non-IS version. It's actually a bit too long to fit, attached to a body,  into one of the bags I used to use with the old lens. The body with grip and two lenses I was carrying around this morning in a Think Tank Photo Digital Holster 50 and attached Skin 75 Pop Down lens case weighed a bit over 10 pounds.

First, here are two shots of a few of the steamboats lined up at the dock. Since all were made with the 5D Mark II I'll just include lens and exposure information in the captions.


Also moored at the harbor are some other ships including some old sailing vessels. This shot is of the masthead of one of these ships, The Onrust, a replica of a 1614 Dutch ship. You can read more about this ship here.

Here is a 100% crop of the face of the masthead. If you click twice on this shot you can see the level of detail this lens and body combination is capable of.

And, of course, I can't resist HDR images when there are nice clouds and sky to be included in the image.

Email ThisBlogThis!Share to TwitterShare to FacebookShare to Pinterest
Labels: Daily Walk, Gear, HDR, Scenic
Newer Posts Older Posts Home
Subscribe to: Posts (Atom)
To view larger images simply click on the image then click on it again. You can then simply use the back button or swipe to go back to the blog.