Here are five of my favorite shots from 2013 shown here in chronological order, along with some technical information.

I have decided to keep both camera bodies I've used for these shots, at least for the time being.
Posted by David Truland at 11:43 AM No comments:

Out Of Focus Treetop Star

I was playing with some gear this morning and decided to attempt some out of focus shots of Christmas lights.

Using the EOS 7D and EF 70-200 f/2.8L IS II, I set the lens to the closest focusing distance and aimed at the star at the top of my yet to be completely decorated Christmas tree. After trying out various settings I decided that f/5.6 gave me a nice blurred subject and ISO 800 enabled a hand holdable shutter speed of 1/60 of a second given the image stabilization on this lens.

And here is what the star looks like in sharp focus:

Posted by David Truland at 1:37 PM No comments:

Playing With the EOS-M

I had a chance last evening to play around a bit with the EOS-M at a high school holiday concert. I knew what the lighting would be like as this was the same auditorium where I had shot the high school play last month. I also wanted to be able to isolate groups of kids and get the entire groups without having to move around. I chose the EF 24-70mm f/2.8L lens which gave me a field of view of 38-112mm in 35mm camera terms.

This is what the setup looked like, with the EF to EF-M adapter between the lens and the camera. 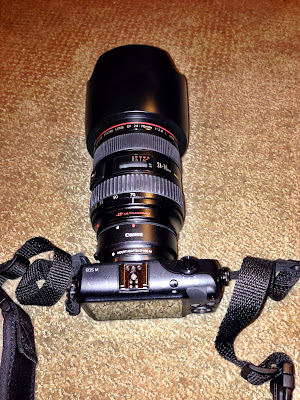 Here are some samples. The only post processing is a slight reduction in highlights. The EOS-M handled the white balance in this auditorium better than did the 5D Mark II that I used for the play.

Posted by David Truland at 1:23 PM No comments:

I haven't been posting much on the blog recently as I work through some significant changes in gear. I'm sticking with Canon but streamlining my lineup of both bodies and lenses.

I'm part way through the process, having sold my EF 17-40mm f/4L lens and purchased an EOS-M kit with the proceeds. I have decided to sell my EOS 5D Mark II body and use the 7D and M as my bodies going forward.

For sale also is my EF 2X Extender II. Items that may or may not be sold in the future are my 580 EXII speedlite, Promaster extension tube set and ThinkTank Photo and Lowepro backpacks.

I hope to have some EOS-M samples soon.

Posted by David Truland at 7:31 AM No comments: