I've shot a lot of deer on Peebles Island and lately I usually just wave and walk past looking for Eagles or something out of the ordinary. Today, though, I used the deer as subjects to test out the image quality of my EF 70-200mm f/2.8L IS II lens with the EF extender 1.4x II with the EOS 7D.

I've decided that the image quality with the EF extender 2x II is not good enough to use on a regular basis and have taken that out of my bag. The 1.4x extender is sharper but it's borderline quality as to whether it's worth it or not. I'll keep it in the bag for unique occasions but don't expect it to see a lot of use. I actually find it more useful for extreme closeups than to bring distant objects closer.

Autumn is a great time to shoot deer as the colors in the environment are warmer and antlers are at their peak. Here are three shots from this morning. The first two shots were landscape orientation compositions cropped to a 3x4 ratio portrait orientation composition. The third is only cropped from 2x3 to 3x4 format. I actually had to back off the zoom to get the deer in the frame. I would have had a better quality photo without the extender.

The first one is yet another example of how I remain used to my long lenses being single focal length lenses and keep forgetting to zoom out to the long end. If I had zoomed out I would have been at 280mm and would not have had to crop as much. The background and foreground would also have been more out of focus.


Posted by David Truland at 3:30 PM No comments:

It's time for this year's photo comparison of some maple trees I began photographing in 2009. This year I'll repost all of the photos with a brief summary of that year's weather statistics.

Weather statistics are for the period June 1 to September 1, are obtained from the National Weather Service and are taken at the Albany International Airport, only a few miles from the photo location.

Interestingly, each photograph has been made with a different camera body, which I will identify in the caption along with the date the photo was made.

Posted by David Truland at 1:35 PM No comments:

All the games I've shot so far this year have been under the lights. The constant lighting makes it easy to set a manual exposure and not worry about it the rest of the evening. Yesterday, however, I was shooting a late afternoon game on an overcast day. The changing light meant that I needed to use an auto exposure setting but even though it was overcast I was able to use lower ISO settings and higher shutter speeds than under the lights.

Backgrounds can be more distracting during the day as the light falloff at night renders most of the background too dark to be distracting. Accordingly, a wide aperture is needed to blur the background. I find that anything slower than f/2.8 results in too great a depth of field and the shots look like they were taken with a point and shoot camera.

So, you need f/2.8 under the lights to get a fast enough shutter speed to stop the action at an acceptable ISO setting and you need f/2.8 during the day to isolate backgrounds. I used various ISO settings so as to keep the shutter speeds generally between 1/1000 and 1/3000 a second. Slower than 1/1000 and a higher ISO was needed and faster than 1/3000 and I could use a lower ISO for better image quality. There are ways to set aperture and shutter speed manually and have an auto ISO setting to adjust the exposure but I haven't played around with that as yet.


Posted by David Truland at 8:27 AM No comments:

Email ThisBlogThis!Share to TwitterShare to FacebookShare to Pinterest
Labels: Sports

Using a monopod, I could keep the lens image stabilization on, but I turn it off since it isn't really necessary with the shutter speeds required to freeze action, it uses battery power and the lag while it engages and disengages can be distracting.

I find I get more reliable results deciding on exposure settings for the conditions and setting those manually rather than having the camera's meter constantly changing shutter speeds. For night games at the new artificial turf field where I was shooting this week I found that f/2.8 at 1/750 second at ISO 3200 were good settings. I would have liked to have a 1/1000 second shutter speed but the lighting was not good enough and ISO 3200 is as high as I will push the 7D.

You can view the entire gallery of this year's soccer photos at http://trulandphoto.zenfolio.com/soccer2013. Here are a handful of shots from the past week: 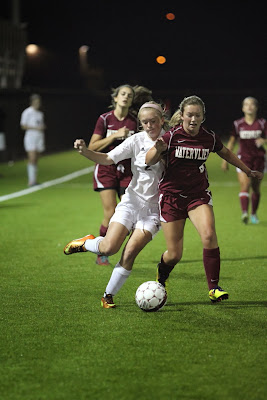 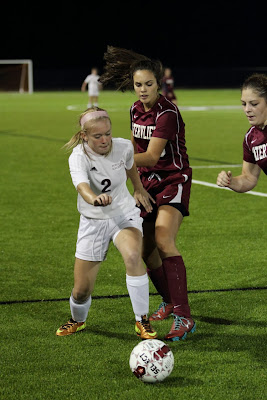 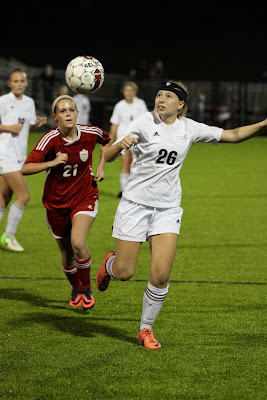 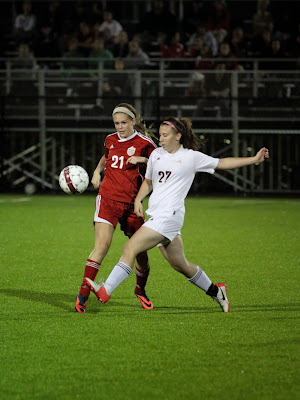 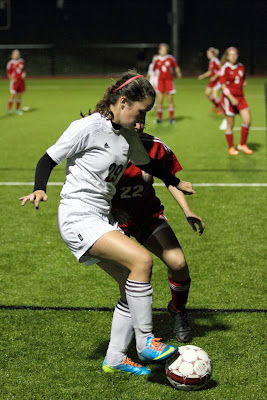 Posted by David Truland at 8:01 AM No comments:

Email ThisBlogThis!Share to TwitterShare to FacebookShare to Pinterest
Labels: Sports

It wouldn't be a trip to Maine without stopping off at the Cape Neddick Lighthouse, better known as Nubble Light, on the way back home. This lighthouse located on a small island just feet offshore and it has to be one of the most photographed sites in the United States. Even in a pouring rain in October you will find more than a handful of cars lined up in the overlook parking lot.

With yesterday morning's fog in the background and obscuring the sunlight, the lighting at the location was flat and even. I decided to play around with HDR processing to get the colors to stand out a bit and to get some texture in the rocks while keeping an overall natural look.

Posted by David Truland at 7:03 AM No comments:

Email ThisBlogThis!Share to TwitterShare to FacebookShare to Pinterest
Labels: HDR, Maine Coast, Scenic
Newer Posts Older Posts Home
Subscribe to: Posts (Atom)
To view larger images simply click on the image then click on it again. You can then simply use the back button or swipe to go back to the blog.