This looks so good I can almost taste it. The drink itself was made with ice which had fallen off tree branches after the ice storm in December, 2008 which left many in our area without power for days. The beverage is, of course, Scotch. I don't recall what brand.

I will be enjoying similar beverages this weekend, but with more normal ice cubes. Everyone have a safe and enjoyable Christmas weekend.

Posted by David Truland at 7:35 AM No comments:

The Other "Side" of Peebles Island

But the island also has an industrial history. A railroad line ran across it at one point and Cluett, Peabody and Company built a textile mill with a bleaching plant on the Island in the early 20th Century. Some of those buildings remain and while some now are used as State Office of Parks and Recreation facilities others remain vacant and in poor states of repair.

Here are two photographs of old towers I made a week or two ago.  It was early in the morning on a nice clear day with lots of contrast.

Posted by David Truland at 2:18 PM No comments:

Right before the bird flew away, I did walk around the tree to look for another angle. The lighting was not good because the bird was in the shadows and the sky was bright behind the bird. But, with post processing, I was able to turn this picture: 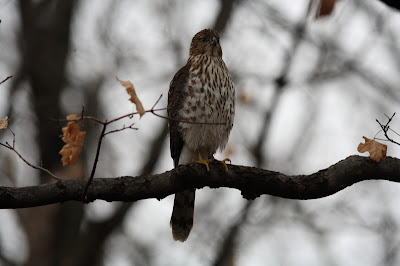 
Certainly nothing outstanding, but decent enough to add the hawk to the bird guide collection on my zenfolio site. You can visit the bird fieldguide here.
Posted by David Truland at 9:23 AM 1 comment:

Whose Limb is it Anyway?

I happened upon a Red-tailed Hawk sitting on a tree limb earlier today. The bird spent about a half hour preening in the same place. Unfortunately, there was a thick limb between the bird and I so there wasn't really an opportunity for a nice "portrait."

But, an Eastern Gray Squirrel happened to climb the trunk of the tree and head out onto the limb where the bird was sitting. Clearly, the hawk is higher up on the food chain and I can only imagine what went through the squirrel's mind at that moment.

The two sat there for a minute or so and then the squirrel backed off and headed to safety.

Posted by David Truland at 6:03 PM No comments:

Email ThisBlogThis!Share to TwitterShare to FacebookShare to Pinterest
Labels: Wildlife
Newer Posts Older Posts Home
Subscribe to: Posts (Atom)
To view larger images simply click on the image then click on it again. You can then simply use the back button or swipe to go back to the blog.