I made my once or twice a year trip to the riverbed at Cohoes Falls last weekend. Remembering the 85 step staircase and steep trail I'd have to climb up on the way back, I only brought what I needed down with me. In addition to my Canon EOS 5D Mark II and EF 17-40mm f/4L USM lens, I used my big tripod and remote cord (I almost called it a cable release, dating myself).

I used both a three stop neutral density filter and polarizer filter in order to achieve slow enough shutter speeds to blur the water. All images were made at f/11 and ISO 100 with the shutter speeds for normally exposed images ranging from 1/4 second to 1/10 second. The widest I could shoot was about 19mm due to vignetting from the thickness of the stacked filters.

As is usual at Cohoes Falls, three shot HDR processing was needed due to the degree of contrast between the flowing water and darker cliff sides. I used fairly aggressive HDR settings on these shots because the sky was fairly plain and I don't mind this look once and a while. Since I save all my RAW files, I can always go back and process them differently for a more natural look.

I wanted to concentrate on including foreground interest in the compositions and while I usually try to avoid including the power lines in shots at Cohoes Falls, I decided to include them in some shots this time. I like the way the line of the towers follows the lines of the clouds and cliff edges.

These first two perspectives are interesting. While the second shot is taken from farther away from the falls with a different foreground, by using a longer focal length the cliff and falls are almost exactly the same size in the image. 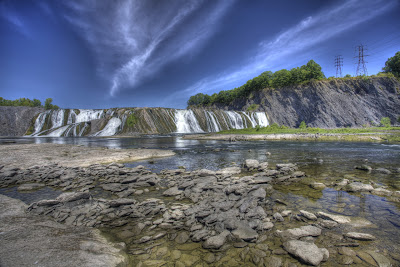 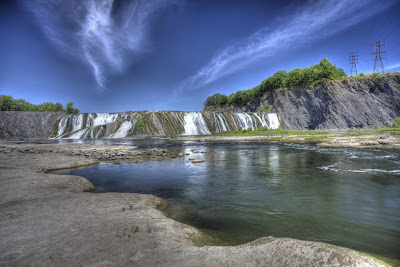 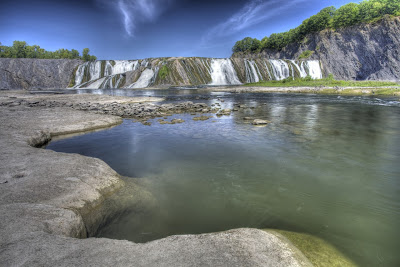 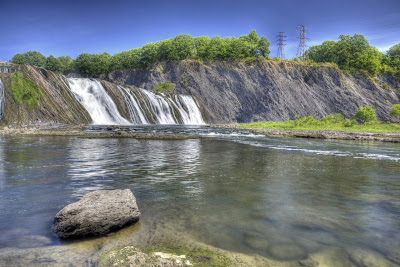 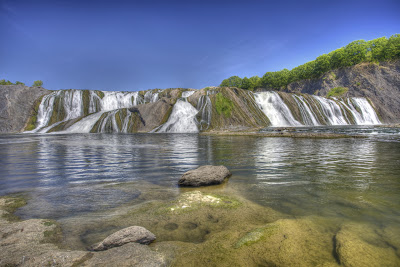 Posted by David Truland at 6:14 AM