Most mornings, I walk a 2.7 mile circuit from my home around and across the Hudson and Mohawk Rivers. This walk goes through two cities and a village, each in a different county. It crosses the Hudson River twice and crosses two branches of the Mohawk. It also takes me through a State Park.

The walk can easily be visualized in the google earth capture below by following the bridges across the rivers. The picture is looking West. The Hudson River runs South (from Right to Left) and the Mohawk River is the multi branched, muddy river emptying into the Hudson. The Google Earth image is dated October 7, 2011, about five weeks after Tropical Storm Irene and less than a month after the remnants of TS Lee had both rivers above flood stage. The Mohawk took many weeks to clear up from the mud churned up by the flooding. 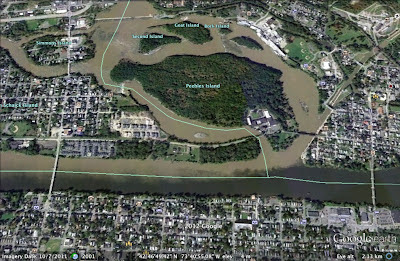 I've started bringing a camera along when I walk. Yesterday morning, I was crossing one of the bridges just as the sun was hitting an apartment complex across the river.
Posted by David Truland at 7:07 AM